I might be famous as the one person to start a phobia all by myself and I have deemed it to be Femoraliaphobia.

For years one of my many obsessions which includes a need to check the weather forecast, always knowing what time it is and the need to have everything in neat rows has been to create drawers in everything I build in the shop. This coming year I plan to build another kitchen table, this time longer than the eight foot one we presently have, at least a twelve footer, and I’ve included drawers in the drawing. Years ago my Amish ancestors always included a drawer in the end of the table, where the elder sat this, I have been told, was a Bible drawer. I’m thinking silver ware etc. but still a functional and quite practical application, even if I do say so myself.

While on the topic of the Bible, it says in the Good Book “...go forth and multiply...”. We had five children, all married and in the process of adding to the population of the world. One would think that an eight foot long table should suffice but at times I think the kids are taking the Bible a bit too literally; this has caused the need for a longer, twelve foot table. Of course not only do I digress from the subject of this blog but I do so in jest.

Yes, I’ll put drawers in anything and everywhere I can. I once built a table for one of the washrooms that fit in between the wall and the bathroom vanity. My wife was less than impressed to find that not only was there a drawer in the front of the table there was one in each end as well, even though they could never be pulled out due to the wall on one side and the vanity on the other. She of course needed to know why; she is a bit of a “needy” woman, always needing to know why, in her words, “would anyone in any imaginable universe even think of doing ...(fill in the blank)?” My answer is always to paraphrase Sir Edmund Hillary in that I did it because I could. This makes me once again digress with the thoughts of Sir Edmund Hillary at the summit of Everest and never having his photo taken to commemorate the event. He took a photo of his Sherpa holding his ice axe but never had his own photo taken. Did he have fears that Tenzing Norgay would take off with the camera and run to the nearest pawn shop? I suppose one could argue that there may have been a pawn shop as close as 29,029 feet away, albeit straight down. You really need to work on those trust issues Sir Edmund.

Sorry for the side tracking, I’m back now. I believe that most of the world’s problems revolves around drawers, either the over abundance of them or the lack of drawers in some cases. In the past some countries obviously had too many drawers and found most were empty. Hannibal is a good example, too many drawers and not enough to fill them, so he went to Rome because they had more things than drawers to put them in and brought stuff back for the drawers of Carthage. Everyone was happy until the cabinet makers of Rome made more drawers and Rome wanted their things back and therefore went to Carthage to get their stuff back to fill their new drawers. They liked Carthage so much they stayed in the area after they applied salt to the lands where the city used to exist, as a biodegradable weed control, or so I surmise.

Almost everything should be kept or could be kept in drawers. Socks, in drawers; silverware, in drawers; handguns, in drawers; cats, well perhaps not everything. I like to keep most of my collection in drawers as to display all of it in display cases would take up the whole house, seriously. So as I finished up the second drawer cabinet of the year my dear wife expressed a deep concern about my obsessive behaviour. She thinks I have Obsessive Compulsive Disorder (OCD) which is sheer madness because first of all it should be CDO because that is the correct order the letters should be in, and secondly, ... alright I don’t really have an argument. I think she is the one with physiological problems and I have even come up with a clinical term for it, Femoraliaphobia; a fear of drawers. Her argument is that as soon as I build more drawer cabinets I can’t stand not filling them and that starts the collecting mania once again. Yah, like collecting could ever be considered a mania; sometime I wonder why I even try to have a conversation with her. Women! They’re always bringing reason and common sense into every discussion.

Just to prove her wrong I went into the study, at her request, and counted the number of drawers holding my collection. I only have 199 drawers, all in beautiful neat rows. It’s not like I have 200 drawers or anything, now that might be considered obsessive. Not by me mind, but by some.

So there you have it. I may have accidently caused my wife to develop Femoraliaphobia. If she decides to seek help I can build her some drawers to keep the files in, after all most things should be kept in drawers.

I’m off to surf eBay now as I noticed there were some empty drawers in one cabinet. 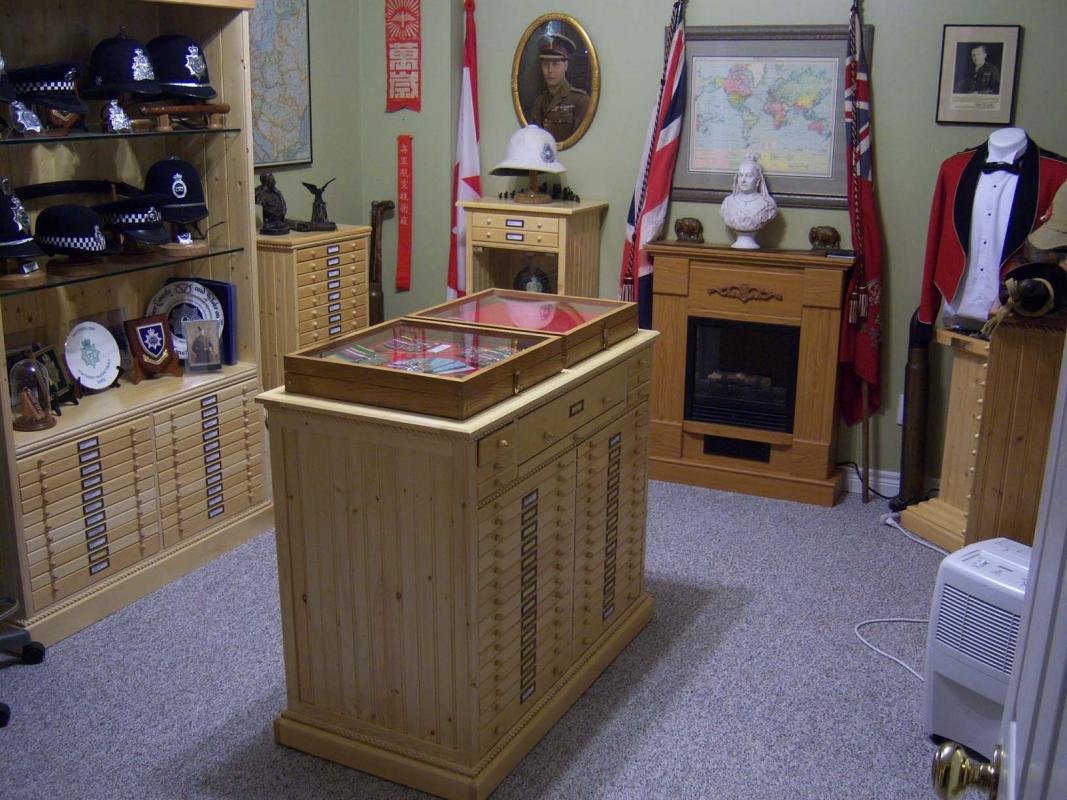