Not too long ago a close friend, a man I both respect and admire, offered the suggestion that politeness was the most acceptable hypocrisy. Following our friendly debate on this point of view I thanked him for providing such a provocative subject upon which to ponder; later that evening I removed him from my Christmas card list. 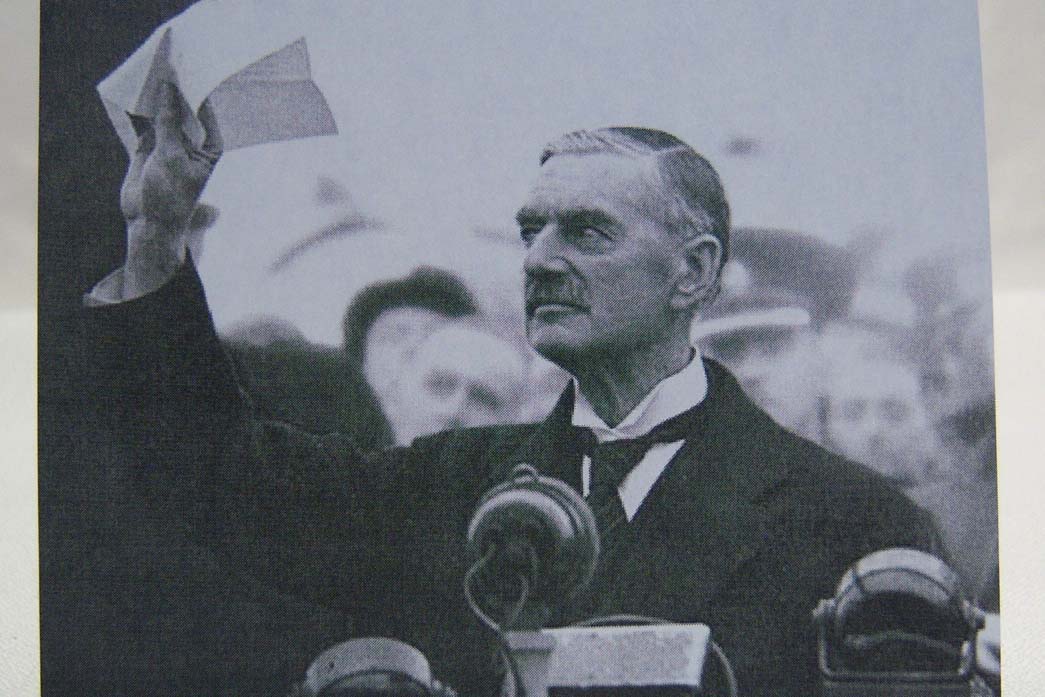 It occurred to me, as I later revisited the subject of politeness and hypocrisy in my mind, that politeness and diplomacy are conjoined twins of the same philosophy, interchangeable and indistinguishable one from the other. Not to digress too far; I do believe that if I were to be able to choose any profession in another time period it would be the Diplomatic Corps in the Victorian era as I am not unfamiliar with diplomacy (a.k.a. hypocrisy). As is often the case one line of thought triggers another and this was no different as I soon started to consider the subject of how popular history has treated Neville Chamberlain and his attempts to avoid what turned out to be the unavoidable Second World War. I have used the term popular history to indicate that history can be divided into several categories. These being, propaganda; history manipulated for the masses in order to shape their opinions to match the current powers, popular history; history that may or may not be accurate but is held as true due to past propaganda (see the first example) and remains accepted until someone delves into the facts and reports them, and lastly, the true historical facts.

This following recitation is both opinionated and derivative and therefore freely open to debate, so, as they say, lets have at it. I wont bother to reference the work of others in regard to quotes with a citation because these are easily found in biographies and on the internet.

I think it best to look first, not at the times when Mr. Chamberlain has undeservingly gained his negative reputation but rather take a moment to review the powers of a Prime Minister. To think that the Prime Minister on his own has the sole power to declare war on another sovereign nation and thereby commit his countrys population to invade another nation is naive, to say the least.

While the Prime Minister is the leader of the political party in power he is still bound by procedure. If the PM were to table a motion so outrageous as to be against the will of his party and the motion was defeated then the opposition party could, and probably would, demand a vote of no-confidence. If the vote passed in favour of the opposition the government would fall and an election would be held. I must assume, due to lack of knowledge, that the American Government is structured in much the same way. I do stand to be corrected on this or any point of view I hold. This fact of Parliamentary procedure alone dictates that a PM should not be held solely responsible for the actions of the governing party or majority of the publics will and wishes.

Next we need to look at the time period itself. Much has been written about the economic and personal devastation brought on by the Great War. The desire for peace at any cost was a commonly held desire, even for the vast majority of the German people during the early years of the Nazi Party and I would hazard to say even through the build up to the outbreak of hostilities between Germany and what would become known as the allies. Certainly there was a feeling of euphoria in Germany as Hitler regained lost territories, rejuvenated the economy and generated a fanatical level of national pride. In other words the majority of the population on either side was not prepared to enter into another worldwide conflict as had been experienced a mere twenty five years prior. Into this atmosphere of avoidance of conflict Mr. Chamberlain was tasked to carry out the will of the people.
Following the will of the people in those times Mr. Chamberlain was driven to assure that the youth of Britain and her Empire would never again be led like sheep to the slaughter of the battlefield. I would challenge anyone, without the benefit of hindsight, to find fault in that conviction. If we are to hold Mr. Chamberlain solely responsible for the failure of diplomacy and therefore the outbreak of WWII then we need to look at other examples from the same time period.

On February 24, 1933 the League of Nations adopted a report blaming the Government of Imperial Japan for events in Manchuria (Manchukuo). In response to this action the Japanese representative, Yosuke Matsuoka, delivered a speech claiming that Manchuria belonged to Japan and they would not entertain any motion that they withdraw from what was, in their view, territory that was theirs by right; then walked out never to return. What was the action taken by the League of Nations to Mr. Matsuokas rejection of the report? Virtually nothing. Their lack of action, possibly a result of their failure to foresee any such actions by a fellow member nation and insufficient plans for a military intervention, caused hundreds of thousands of Chinese men, women and childrens death. Perhaps it was felt by the Western delegates that it was on the other side of the world and it didnt really affect their own people. However, there were British, Canadian, Australian, New Zealanders, Indian and Americans who would be caught up in the onslaught of Imperial Japanese aggression. A good number, far too many, would lose their lives both in the battles and afterwards during their imprisonment as Prisoners of War.

January 3, 1935, Abyssinia (Ethiopia) appealed to the League of Nations to intervene between Abyssinia and Italy, who had invaded Abyssinia. Article X of the Leagues charter forbids any member nation from invading the territories of another member. The Leagues response was to place an arms trade embargo on both countries. Italy had built up her armed forces in the years leading up to this crises and therefore was unaffected by the embargo. Abyssinia, on the other hand, was ill equipped to carry on a modern armed conflict and was therefore greatly handicapped by the Leagues actions. On May 2 1936 Haile Selassie was forced into exile and on May 5, after the capture of the capital of Addis Ababa by Italy, the sanctions placed on the two countries were withdrawn. Emperor Haile Selassie himself appeared before the League to plead their nations case on June 7, 1937, after Italy defeated the forces of Abyssinia. Even without the Leagues help Italy was only able to control three quarters of Abyssinia due to the continued guerrilla campaign carried on against the invaders.
These are two examples of the avoidance of war at any costs that permeated the thinking of the time. Yet the image that is often portrayed is that of Mr. Chamberlain holding up a white piece of paper and assuring the people of England that I believe it is peace for our time is the one used to express his and only his failure and ineptitude at preventing war.

If we look at the failure of the League of Nations in the two examples noted as compared to Mr. Chamberlains attempts to prevent war it reveals an interesting statistic. Very few people had lost their lives in Europe up to the time of the outbreak of WWII. True people had died, there is no doubt about that, however, the real cost in lives of civilians up to that time was unknown. The impending horrors of the extermination camps was still not a known fact, though in hindsight we can say that it should have , and perhaps was, suspected by all of the leaders of free Europe. What was known to the League of Nations was the murder of thousands of Chinese civilians as well as the slaughter of the Abyssinian troops using primitive weapons to combat modern military hardware and a nation, Italy, equipped with an effective air force, Abyssinia having none. Yet time and time again we are shown that photo of Mr. Chamberlain and the white sheet of paper as an example of failed diplomacy. I would put it to you, the reader, that 63 members of the League of Nations (42 nations founded the League in 1920) plus the number of human casualties caused by their failure to maintain peace is miniscule when compared to the one man blamed for the failure to placate Germany.

It is much easier to cheer on and lead a dedicated and enraged crowd bound and bent on wreaking havoc on an enemy than it is to stand up in front of a potential protagonist and attempt to calm the situation and work toward for peace. This is not to diminish the achievements of Mr. Winston Churchill in any way as he was a great war leader and was and is respected throughout the whole world, and well he should be. Having said that it is a lot easier to wave the flag, make stirring speeches to a nation, and even to the world as a whole when your audience is on the same page as you. I doubt Mr. Churchill ever missed a photo opportunity in his life (carefully staged as they may have been), while Mr. Chamberlain will forever be remembered for holding up that white piece of paper not unlike a flag of surrender.

Neville Chamberlain passed away on the 9th of November, 1940 never to know whether the evil he had attempted to protect his nation from would ultimately be stopped or not. On November 12th Mr. Winston Churchill stated in his eulogy of Mr. Chamberlain,

Whatever else history may or may not say about these terrible, tremendous years, we can be sure that Neville Chamberlain acted with perfect sincerity according to his lights and strove to the utmost of his capability and authority, which were powerful, to save the world from the awful, devastating struggle in which we are now engaged. This alone will stand him in good stead as far as what is called the verdict of history is concerned. 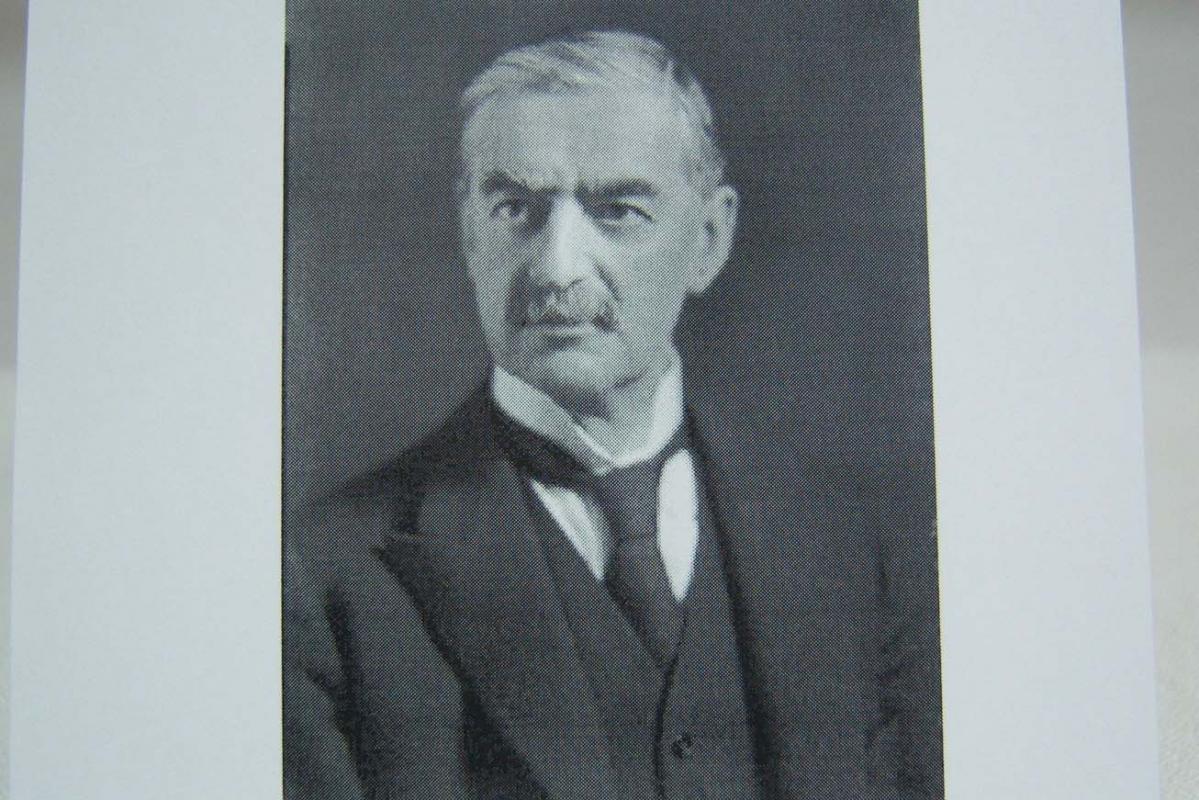 1 Other than quotes this blog consists of my opinions
2 Quotations have been freely borrowed from different sources easily verified by the reader.
3 Citation = a clever way to make my article appear to be much more scholarly than it warrants on its
own merits. Besides a citation is only a reference to someone elses work which may or may not be either original or accurate.
4 The term his is to be taken as meaning either male or female and is not meant to be gender specific.
5 There are exceptions to this and an election is not necessarily a foregone conclusion
6 I use the term Great War as at that time we had not yet started numbering our World Wars, fortunately after number 2 it was decided that perhaps world wars were not that great an idea after all and dropped the numbering system.