I would like to make a personal observation - this blog on my very early life , necessarily deals with the Blitz and the dreadful and casual bombings of defenceless civilian areas. I am old enough - and well versed enough in history
to realise that the blame was not to all German citizens. There was a totalitarian regime in place and ordinary people really had very little control of what was happening. I have many German friends and have visited the Country on numerous occasions. We are dealing with historical events, that hopefully, will never be allowed to re-occur.

This is a 250 kg German bomb - probably the most common to be dropped in the early part of the war. It would have contained nearly 440 lbs. of high explosive - allowing the remaining weight for the casing.

Along with the heavy bombs the Luftwaffe added very considerable numbers of Incendiary bombs and also of high explosive 'butterfly' bombs. These were both dropped together and caused the worst of the damage. The incendiaries
were a mixture of chemicals and could not be extinguished with water. Also, because the explosive Butterflies were dropped at the same time, you were killed whilst trying to put out the fire. Householders did their best - but most of the time the Fire Brigade couldn't even assist.

Every house was issued with two metal buckets for sand and a water bucket and stirrup pump. For anyone who has never seen one, they are used today in greenhouses. The long part of the pump goes into the bucket - you pump the handle to force water under pressure through a short hose you held in your right hand. The sand was to try and smother the incendiaries - the water to try and put out the blaze it had started. If it didn't upset me so much to write this - I could just laugh at the absurdity of it all.

Yes - we did practise - Mother was i/c sand buckets - Father was the pumper - me, at 4 years old was the supplier. I had to get sand from a heap in the back garden - water from the bathroom and, keep running next door to see my Grandmother was alright. Most houses burnt down when they were hit - the bombs settled in the lofts and people couldn't get to them. And, Yes - we were hit ! An incendiary hit the roof - came right through the ceiling and landed in the upper hall. My Father got sand on it before it did more then scorch the wallpaper. We were very lucky.

Although the usual age for school was 5 years - looking at dates I think they must have allowed us to go sooner. Every
morning all the little children in the road met and then we had a short walk alongside the golf course to get to school. After the first few mornings parents stopped coming with us - it was a matter of a few hundred metres . I think it was one of these mornings that I knew I was destined to be a Constable............
We had a very heavy raid the night before and all of us were a bit shaken - I suppose there must have been 5 or 6 of us - all about the same age. While we were walking down the lane to the school I noticed strings of bombs hanging from trees just inside the golf course. We had regular lessons teaching us to recognise all these different things and I knew at once that they were Butterflies. I remember shouting that we had to run at once to school - which we safely diid. However, it was days before our area was declared safe - they were everywhere and many houses had been damaged or burnt.

I suppose to small children it was all a bit of a game - but, I think we did understand how serious it all was.

Some final memories of this house - we moved from Bexley to Blackheath in about the end of 1941. I mentioned earlier that we did not have an air raid shelter. When the daylight raids started in Sept. 1940 there was an urgency to having one. We started off with a Morrison Shelter , whilst waiting for the Anderson to be delivered. The Morrison was designed to be a table in the daytime - it had a metal top - also on the bottom. The sides were steel mesh and you crawled through a small door. It was horrible ! Try three of you sleeping in something the size of a single bed.

Anyway, we had to put up with it for a few months whilst the Anderson arrived and my Father and neighbours dug it's pit.
The War seemed to 'pull' people together and when something big , like the shelters had to be built - then everyone joined-in. The Anderson was six curved sheets of steel that had to be bolted together at the top. There was a metal backpiece and the front had a door opening. You made a hole about 3'6" deep (approx.1 m.) and built the shelter. The top was then covered with the earth you had dug out. They actually provided good protection - but they were damp and cold. Fortunately, my Grandmother had selected a brick shelter with a concrete roof and this was more comfortable. We used this one most of the time.

First thing in the morning - when Father opened the shelter doors - I had to rush off and look for shrapnel. Sometimes it was from bombs but, mostly from the anti-aircraft shells. All the boys collected this and by the time I moved must have had a pile about 3 feet high (1m)

When we into the shelter at night , there was always a steel box with all the family papers - insurance ID's etc. This was the only time in our history that British people had to carry an identity document.

OK - next episode, dear reader I shall be in another house - a very grand one ! The only problem was that Hitler kept trying to destroy it........ 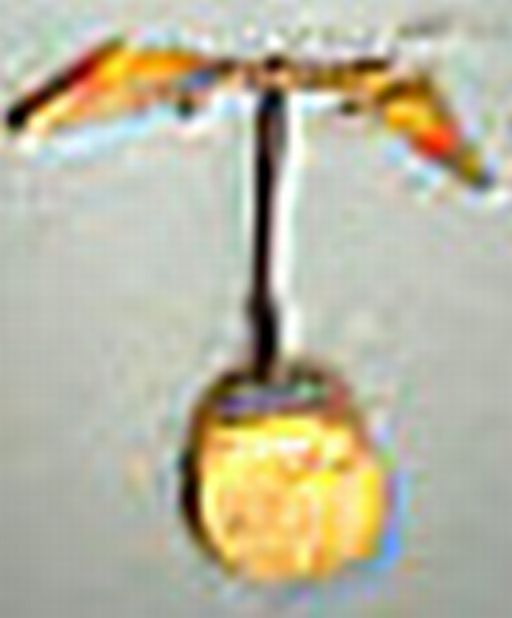 This was a Butterfly bomb - wings opened and it 'twirled' down. 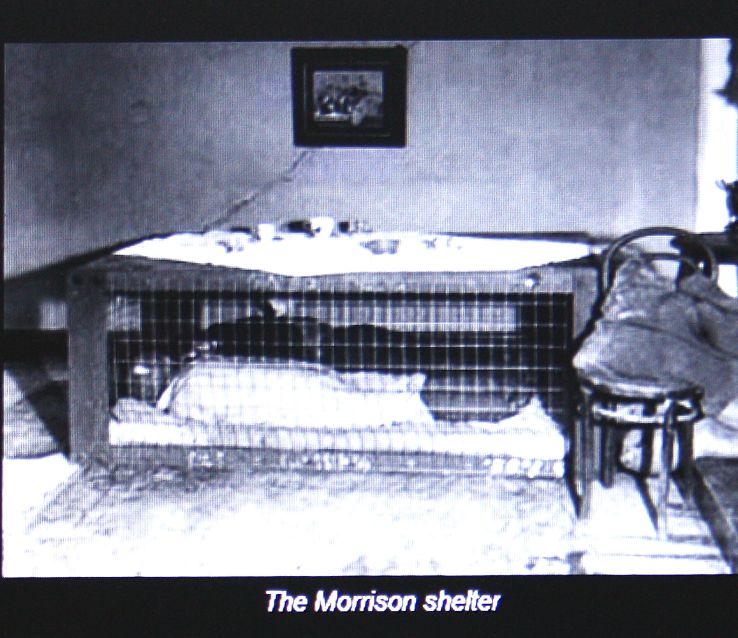 A file picture of a Morrison shelter