One of the strange things that keeps coming to the surface with this article on my early War years - is the comparitive
normalacy that existed with ordinary - day-to day life. Yes, we lived in fear of the bombings and everywhere you went were bombed out or, damaged buildings. Yes, we also had severe rationing and shortages. But ordinary life went on - schools opened, business' were run, shops opened and we found ways to get around.

Just before we moved I developed a serious ear problem - something to do with the mastoid bone. I spent three months in hospital - for something today that would probably have you out in 3 or 4 days. They did not seem to have childrens' wards - at least I was in a general ward . Some civilians - but most were injured servicemen - some still in recuperation from Dunkirk.
You can imagine - I was thoroughly spoilt by everyone - I suppose I reminded them of their children or, brothers. When I was well enough to walk I used to help the nurses take medicines and drinks around. When the airraid sirens went off, those that could walk had to go to the shelters in the basements. Those in beds had to take their chances with the nurses staying.

Newspapers and magazines continued to be published and there was a great public demand for out of the ordinary items.
My Father had a two acre site in Greenwich (on the River Thames) growing fruit trees and bushes. There was great demand for these by mail order - and the Post Office still delivered very quickly. A large Nursery in Greenwich came-up for sale and the Ministry of Food asked him to buy it and produce tomatoes for London. With the loss of the Channel Islands usual supplies were gone and they were a much needed part of a staple diet.

My Father agreed and so he bacame the owner of a five acre (over 2 hectares) market nursery - which consisted of five
enormous greenhouses and many smaller ones. We were on the bombers' path so for the next 4 years he had to battle with special glass allocations to have them repaired after raids. He eventually had a shop built and supplied green grocery to the surrounding areas. I can remember going with him to Covent Garden Market early in the mornings to get supplies. It is now a street market for general goods. We had a Ford 10 cwt van (1/2 ton) and a i ton Old Morris van to move things around - with a minute petrol allowance for the two. Every week the famous old Humber car that Sir Winston Churchill rode-in would come to the nursery for tomatoes for 10 Downing Street. My Father showed me the rear window that was covered in small scratches and almost impossible to see through. The chauffer explained that it was the diamond rings of the Society women who mobbed Churchill whenever he was out

All of the above - and the difficulties of travelling - meant that we had to move closer to Greenwich. Blackheath is probably the most up-market area of London and indeed probably in the UK. It was developed in the mid 19th Century - although it is from when the Railway Station was built-in the early 20th. C. that it became so desireable. From Blackheath to Central London was less then 1/2 an hour - but, even with a horse and carriage it was probably under an hour.

Surrounding the large Heath were the houses and Mordern Road and the adjoining Paragon - a curved matching row built in 1806. were the most sought after. On the corner facing the Paragon is the famous Mordern College - this was built-in the late 17th C as Alm Houses for retired sea captains - although I saw on one stupid estate agents list that it was for retired Turkey farmers !

Mordern Road had been bombed badley - there were at least two - or, more - totally destroyed houses. This had happened in the Blitz and the rubble had been removed to be re-cycled for building material.

When Father was looking for a property he was offered this lovely Victorian house on 4 floors - 29 rooms in total. An elderly titled lady lived there and was desperate to go and live with relatives in the Country. Father made an offer of 1,000
pounds (I think the $ was on par then, so $2,000) and she accepted immediately - no-one was buying, everyone wanted to leave London. It had a large garden divided into two with trees in the middle - the far end was for greenhouses and vegs. and at the far end were the stables and staff housing. I see now that these have been separated and new houses built. 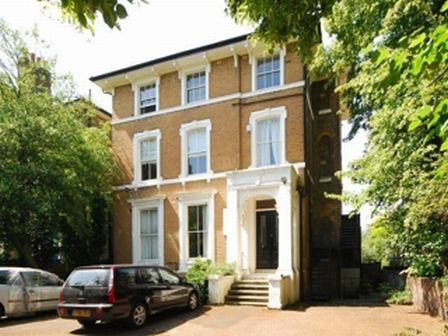 I have found this on the net - I have no idea if it was ours - but, it looks the same. Now days they are all flats. Father had the two top floors made into independent flats to help people who needed accomodation and we lived in the Ground floor and basement. The house was a paradise for a small boy and she had left all the toys in the nursery - so I found myself with a four feet long pond yacht - which I could hardly carry.

Well, in my usual way I seem to have 'rabbited ' on for pages - I do hope my one faithful reader had not become too despondent and jumped off a bridge. Next time - a different view of the War - and I start to grow-up.