Often when I start to write what is supposed to be a serious article and I get into the research I find that suddenly I start to doubt my original viewpoint.

I was researching into the Battle of Crecy, 26 August 1346 with the intention of writing a piece on the event when I found a good deal of contradictory opinions and sketchy so-called facts.  It is not my intention to hammer on and on about these opinions but as an example I found one source as stating the number of Genoese Crossbowmen mercenaries being at 5,000 and another at 15,000.  I can over look a few hundred or even a couple of thousand but not a difference that equals three times greater or lesser.  Interestingly enough King Edward III set sail from Portsmouth with a fleet of 750 ships and 15,000 men on 11July 1346. Perhaps this is where the confusion came from in one of my sources.  Another source doubts the capability of the city of Genoa to be able to provide even 5, 000 mercenaries, though we’ll accept that number for now. As you can see right away I started to doubt my sources.

My viewpoint has always been that the British longbow was far superior to the crossbow of the same era, as in the case of this battle in 1346.  Spoiler alert!  I still hold to my original hypothesis that the longbow was superior but not as it was based on the information I have always held as accurate.

A quick overview of the Battle of Crecy as it pertains to the difference in bows is as follows.  The British had the longbow the French the crossbow; to be more accurate the Genoese mercenaries had the crossbow in the employment of the French.  The English held the high ground, a classic tactical move, on a south slopping hillside at Crecy-en-Ponthieu.  This put the French mounted knights at a disadvantage from the start.  Out flanking the English was impossible for the French as the English left flank was anchored at  Wadicourt and the right flank protected by Crecy and the Maye River just beyond the city.  In essence this constricted the French into what could be termed a confined killing zone. Since the English had arrived well before the French they were well rested and fed, in contrast to the French who were weary from the long march and had not had time to take sustenance. King Philip VI of France was advised to encamp for the night so the troops could be fed and well rested prior to the battle.  Unfortunately for the French, King Philip listened to his to his senior nobles and elected to fight on that very day.

Around 16:00 hrs (4:00 PM for you non-military/police types) a heavy rain started.  The British took their bow strings off their bows and stored them under their waterproof hats.  The Genoese could not remove their bowstrings as this required special tools to install and remove the strings.  The wet crossbow strings, which could not have been removed or even adjusted to” take up the slack”, greatly reduced the range of the crossbow while the dry longbow strings, once the British bows were re-equipped maintained their range. As the Genoese advanced the setting sun shone directly in their eyes blinding them. At the same time the British arrows started to rain down on them well before they could reach the range to use their crossbows.  The Genoese commander ordered a tactical withdrawal (another and more honorable term for retreat) which enraged the French knights, which was comprised of their nobility.  History states that the French mounted knights slaughtered the 5,000 (or was it 15,000) Genoese crossbowmen for showing cowardice in the face of the enemy.  As we have all probably read the French knights then fell before the British arrows throwing the French battle strategy into complete disarray and defeat.  This defeat sapped the fighting strength of the French to such a degree that defence of Calais at a later date was impossible, allowing the British to control that area for several hundred years afterward.

My issue was with the long held theory that the Genoese crossbowmen could not remove their bow strings in the rain and therefore the range was lessened.  It seems to me that professional mercenary crossbowmen, if the bow string could not be removed, would have planned for such an event, based on their past experiences and training.  Crossbowmen had large shields, called pavises, where they could take shelter from enemy arrows while reloading.  So why not use these to cover the crossbows while the weather was wet?  There are two stories to this question (stories are not necessarily facts).  One story was that while on route to Crecy in the August heat the crossbows plus the heavy shields were too much to carry so they discarded them.  This seems unlikely for two reasons; first you would not discard your pavis in the face of an enemy who could launch almost twice as many arrows as you.  Second the crossbowmen did not carry their own pavises as they had pages, or squires, to do so.  Another theory was that the pavises were on the baggage trains and they simply had not arrived in time for the battle.  The battle did not actually need to start that day but at the insistence of the French nobles it did and the crossbowmen were pressed unto the attack, therefore this might lend credence to the theory that the pavises were indeed absent.  Had the pavises arrived in time would this had made a great difference in the outcome of the battle?  I tend to doubt that it would.  The French were too confined and with the greater range of the longbow and the higher number of shots per minute the Genoese would have suffered greatly.  The impatience of the mounted armoured knights would undoubtedly lead them to attempt an attack which would have been through the front line (the Genoese).  One of the facts of using mercenaries is that you don’t need to pay a dead mercenary and often they would take causalities from “friendly fire” in order to thin their ranks once the battle had turned in the favour of their employer.  The distain for mercenaries by the nobility and the need to reduce the number of survivors needing to be paid may have meant that charging through their ranks was a positive move on several levels.  If we can accept this scenario then the outcome of the battle would have been much the same.

It is my opinion that the English were simply superior archers with a far longer ranging bow, the long bow.  The arrows being much longer and with more weight tipped with a four sided tip called a bodkin tip had greater kinetic energy at impact.  This not only brought down the Genoese but the flower of the French mounted knights. There has been doubt that a longbow arrow could penetrate plate armour; perhaps this is true as it is supported by contemporary observation.  However, the armor on a horse is relatively light and certainly not even close to full covering.  Bring down a knight’s horse and you have finished off the man.  I say this as a man in a couple of hundred pounds of steel armour hitting the ground at speed (full charge) would cause multiple debilitating and mortal internal injuries.   Add to this a 2,000 pound horse and its armour rolling over him and you have what could best be described as “puree of knight in a can”.

I am suggesting that the wet bow strings and perhaps even the missing pavises (if that is even true) combined with the French knights slaughtering the Genoese as cowards as they were retreating is something that was made up by the Genoese survivors themselves.  A mercenary is only as good as the last victory in which he was engaged.  To admit that the enemy (English in this case) were simply using superior bows and were the better archers would not bode well for potential future employment.  To tell the tale that they were exhausted prior to the battle and upon moving back out of range of the English archers, as a tactical move to regroup, then be cut down by the French (a betrayal) would be acceptable to potential employers who may not be friendly toward the French.  Add to this possibility that the French used the Genoese as a reason for their defeat. Always be quick to take credit for your victories and be quicker to deflect blame in the case defeat. It would be folly to suggest the reason for English victory was due only to their superior bowmen as there were other factors such as the tactically wise choice of terrain by the English and King Philip’s decision to give in to his nobles poor advice. This, of course, is pure speculation on my part.

So how can I sit here in the Home Office and make such profound statements?  On what am I basing my opinions and assumptions?  Well, I’m glad you asked.  Almost two years ago this question, in my mind, of wet bow strings drove me to produce two exact as possible copies of a crossbow based on the weapons of the 1300s.  Research alone took almost a year then testing both bows over the course of several months, when time allowed, saw two years pass by.  I built the two crossbows, one for me and one for my friend Brian, in order to see if they would perform in the same manner in the hands of two people who never fired a crossbow before.  The cost of these two bows, considering some parts were made by professional armourers, was just under $1,000.00 Canadian.  I’ll take you through some of the processes of making the bows and the materials used as well as our findings in the next blog.

Please stay tuned for a little applied archeology and discussion as to what we discovered. 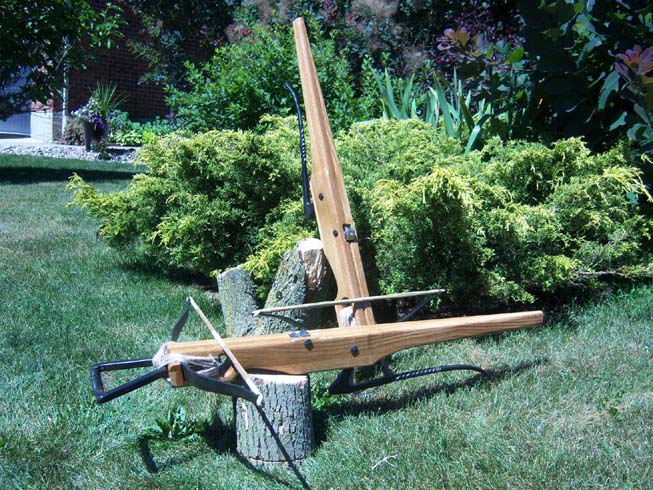