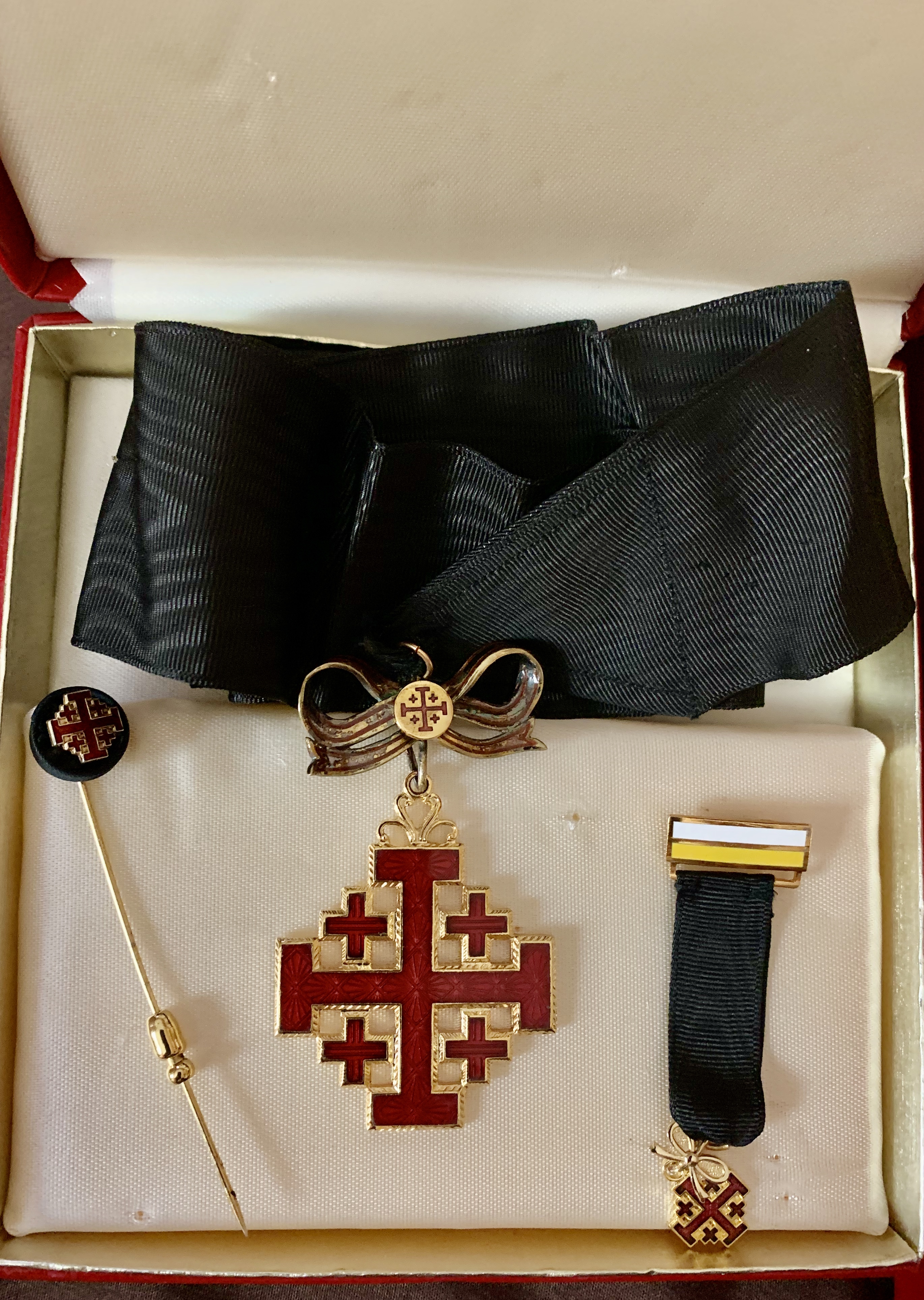 Vintage Equestrian Order Of The Holy Sepulchre Cased Medal Sets Knight & Ladies or Dame version and Knight/Dame Commander sets . The Dame sets as evidenced by the bow style suspension. This set features an enameled Jerusalem Cross with a plain reverse mounted on a V stitched neck cravat. Also comes with stick pin and miniature medal which is mounted on a yellow and white bar indicating the colors of the Vatican. There’s tape with some initials on the lid which I’ve not removed. I’d date the sets from the 1980s. The badge is unmarked as in photo of reverse. The cravat has snap attachments. Case is labeled on the side LHS which I believe is Lady Holy Sepulchre. The KC for the male is marked with the Drs name and KC. The stars are missing from the Knight and Dame Commander sets. The Dame set has the prized pilgrimage shell brooch for physically making a pilgrimage to Jerusalem to aid the sick.

From a Buffalo, NY estate of esteemed doctors/researchers Doctors Julian and Clara Ambrus. While studying medicine at the University of Budapest in his native Hungary during World War II, he was part of the resistance, first against the Nazis and then against the Soviets. Captured and thrown into a Soviet prisoner of war camp in 1945, he drew on his medical training to befriend a Russian woman doctor. After she tipped him off that all of the prisoners were going to be shipped to a gulag in Siberia the next day, he spent the night digging a tunnel under a barbed wire enclosure. When he emerged on the other side, there was the doctor, pouring glasses of vodka for the guards who were manning machine guns in the watchtowers, distracting them long enough so that he could make his escape. He began medical studies in 1942 and married classmate Clara M. Bayer, in 1944. During the war, his wife and her family sheltered Jews hiding from the Nazis in their home and in a vacant textile factory nearby. For saving hundreds from the Holocaust, she later received the Righteous of the Nations Award, the Israeli government’s highest honor for those who are not Jews. Dr. Ambrus went on to become director of cancer research at what was then Roswell Park Memorial Institute. Also a department chairman at the University at Buffalo Medical School, he trained hundreds of graduate student researchers and guided their work. He lectured at medical schools and symposiums around the world. He and his wife helped settle refugees from the 1956 Hungarian Uprising, finding jobs for about fifty former army officers in Roswell Park’s experimental chimpanzee colony. His wife Clara was research scientist at Roswell for twenty-five years.

Set in excellent condition with a rich history and provenance.

Other adverts from Sal