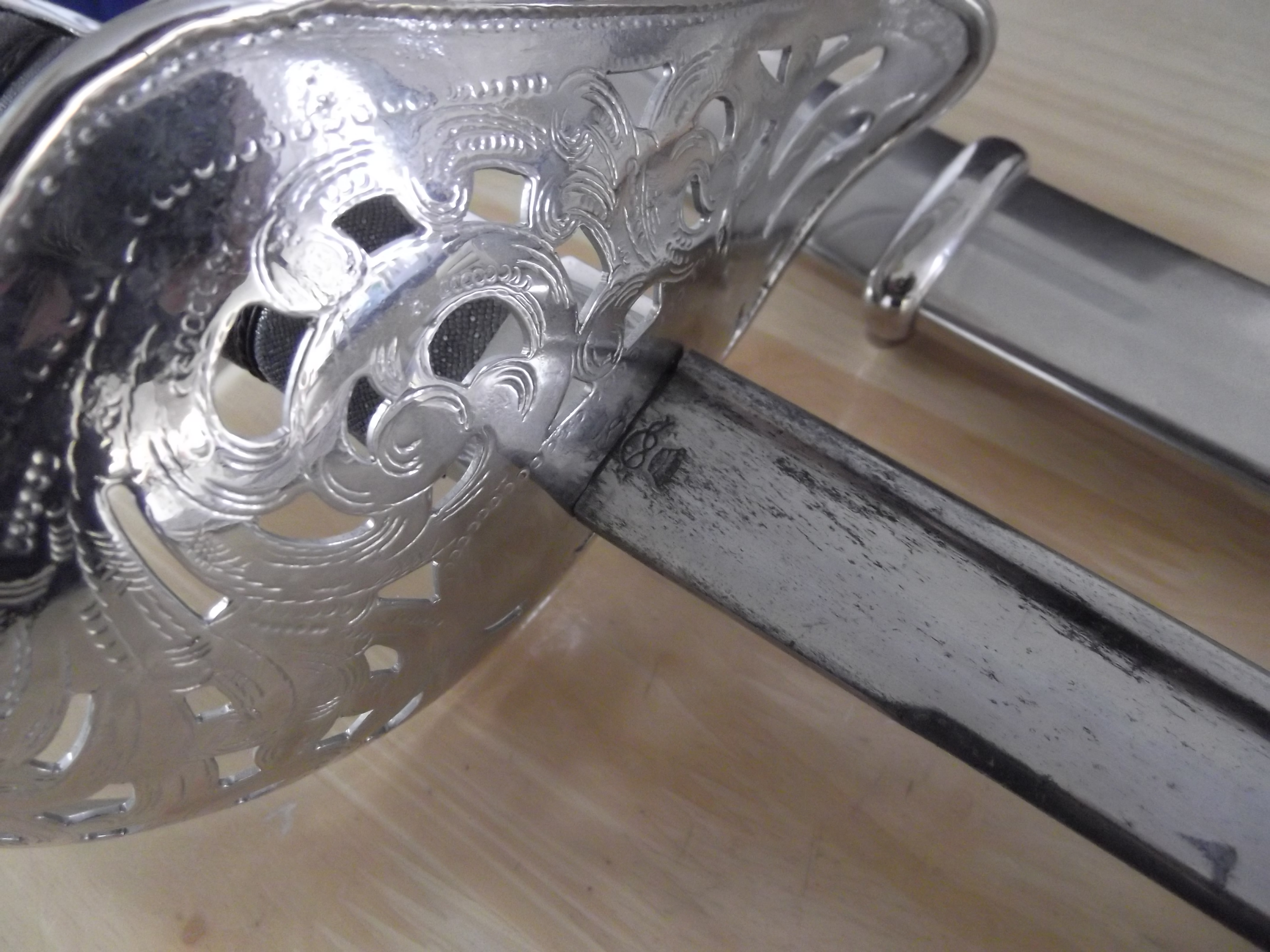 The maker's mark was identified for me (many thanks!) by a fellow enthusiast some years ago as the St. Gotthard Scythe Company which was founded in the early twentieth century in western Hungary.

Despite the "scythe" reference it turns out that this company grew to be a substantial manufacturer of all types of agricultural machinery, selling widely through Central and East Europe before the Second World War.

I understand from a Hungarian acquaintance that the company's premises, which had stagnated under the Communist regime, were bought up, after the Wall came down, by Ford which invested in a diesel engine plant!

Originally, I purchased this sword from a very well established and knowledgeable militaria dealer in England, both of us thinking I had bought a pre-First World War Austro-Hungarian M1904 cavalry sword.

In the event, it turned out that this is a much rarer Horthy regime example made by the St. Gotthard company sometime between 1935 and the Russian invasion in late 1944.

To anyone who might be a bit sceptical about this attribution I would recommend to them Osprey Publishing's very useful "Men at Arms" series book entitled "The Royal Hungarian Army in World War II".

In this book are several photographs and at least one illustration showing Hungarian Army officers carrying this sword during the Second World War.

As I understand it, Royal Hungarian forces were deployed on the Eastern Front and on anti-partisan operations in the Balkans.

This sword pattern was carried on operations and was not simply for parades.

Overall condition of the ensemble is very good.  The sword and basket have no damage.  The grip, too, is undamaged.

The blade and scabbard have a few areas of discoloration which, in my opinion, can be polished out if required.  And there is no "sink-hole" rust anywhere.

I seem to have hit the limit with photo attachments, but can supply more if requested.

As for price, I have given this some thought.  Austro-Hungarian examples do turn up from time to time and seem to command anything from 250.00 USD to 700.00 USD - depending on condition and brass neck of the vendor.

I noticed that Weyersberg Kirschbaum & Co. will charge roughly 600.00 Euros for a brand new M1904.

I think that £650.00 GBP + postage is a fair price for something as rare as this and in such good condition.

If collectors think that they would rather pay a hundred odd pounds less for something that was made last week by WKC then they probably shouldn't be collecting original swords - just my personal opinion, you understand!

With regard to postage, I'll do my best to keep insured postage as low as possible, but be warned that the UK carriers are never cheap!

If anyone has any questions I will do my best to answer them.