Jump to content
You need to be logged in to see additionnal information and be able to contact the advertiser!
This advert is PENDING due to a possible deal. You cannot make offers or buy it for now.
THIS ADVERT HAS EXPIRED! 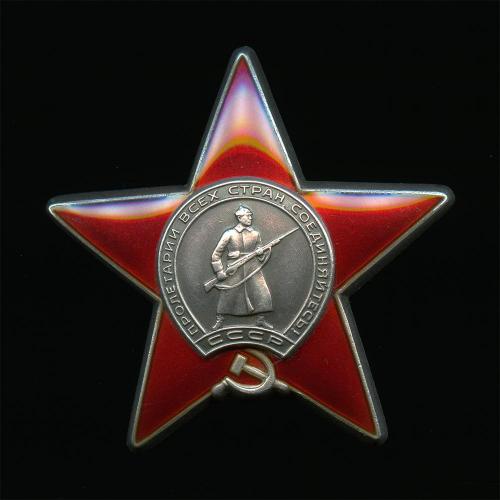 Order of the Red Star #3747427 "rotating-tool"/“бормашина” variation awarded to sniper Mikhail Lavrentevich Ponomarenko in 1976 for heroism in battle in February 1945.


The order is in excellent condition, as seen on the scans. It is a very early example of the “бормашина” variation (“rotating tool”... referring to the serial number engraving). According to a standard reference, the lowest known number for the type is 3747114.

Ponomarenko was 22 years old and a Komsomol member at the time he earned the Red Star. He joined the Red Army in March 1943 and was wounded at least three times – Aug. 43, Dec. 43, and severely in April 44. He also earned a Bravery Medal in August 1944 for the forcing of the Donets River. His Red Star citation reads:

“During the offensive against the city of Otovice on 2/26/1945, Red Army Soldier Ponomarenko showed great courage and bravery. He was among the first to break into the town and with his sniper fire destroyed 3 Hitlerites.”

An extremely rare "бормашина" variation Red Star to a sniper!

$450 (listed price in EUR is GBP is only an estimate at the time of posting). Payment by PayPal (other methods only by advance agreement). No returns. Shipping to the USA only, $10. International buyers – if interested, please contact me in advance to arrange shipping. Thank you!