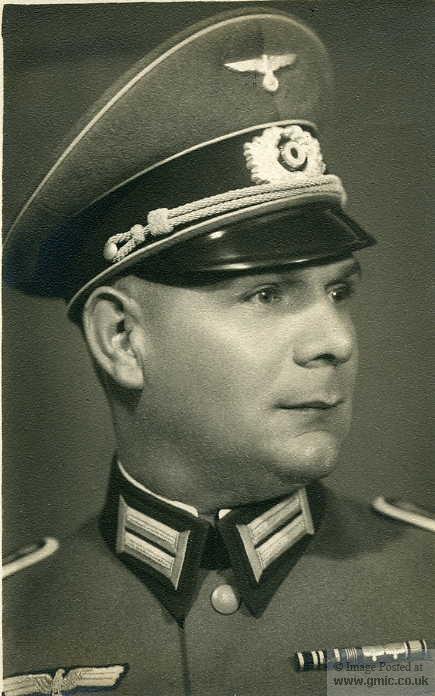 Although tightly cropped so that his full rank insignia are not visible, this fellow must have been an infantry Oberleutnant or Leutnant since there is no upper pip visible near his shoulder board buttons.

His metal cap wreath would date this portrait at about 1941 or so, since officers generally wore bullion wreaths with metal cockades and eagles in the late 1930s into the beginning of the war.

on a half-height style ribbon bar.

* What is significant here is his TWO Wehrmacht long service awards:

He is both too junior and too old for 18-24 years of continuous military service, and could not be in that rank as a "re-tread" with 12-17 years in.

So what we have here is a former Imperial army NCO-- very likely an ex-Offizierstellvertreter-- who, per regulations, has EXCHANGED his former Imperial military Long Service award for the current Wehrmacht equivalent(s) while back in WW2 military service again. Since the Imperial forces counted war years and overseas peacetime duty double for regulars, he could have received an Imperial period XII Years Service Medal in 1920 for as little as SIX real years of service time (1914-1918 = "10 years").

It is quite common to find 12 and 4 (especially) years Wehrmacht gold and silver eagle'd ribbons before a Third Reich 25 Years civil service ribbon device. That is because of former Imperial NCOs being called out of Third Reich civil service jobs back into the WW2 military. The Wehrmacht exchanges did NOT apply to any other wartime uniformed branch, so holders of Imperial long service awards in the Police, National Labor Service, and so on continued wearing their old Imperial military long service awards with tany new Third Reich civilian ones they also held. Those also counted Imperial military service for a bit of simultaneous double dipping.

SS Oberstgruppenf?hrer Sepp Dietrich often is seen in wartime photos wearing a "Wehrmacht" 4 years service ribbon along with his NSDAP long service ribbons. That simply replaced his Bavarian Army IX Years Service Medal. Whether ALL Waffen-SS members entitled to Old Army/navy long service awards were authorized to make the exchange, I do not know. I suspect this was an affectation At The Highest Level by Dietrich himself.


Compare the story his ribbon bar tells with that of the "NAZI Kriegsmarine Officer."