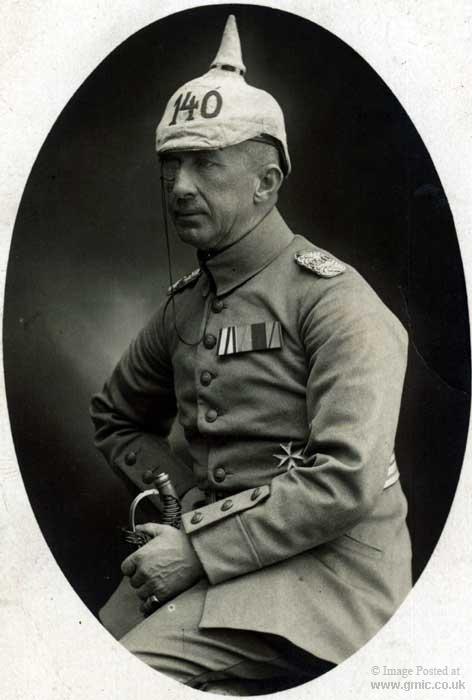 About The Images In Wear Gallery

All the images in this section, unless unavoidably and reluctantly noted (1 commercial postcard), are ORIGINAL, UNPUBLISHED prints from the period, shared by the GMIC members creditted, or from my own collection.

The objective is to show the widest possible range of real life wear--including mistakes, fashion foibles, and downright blunders as well as the official regulation norm.

As an overview, I have included photographs of Austro-Hungarian, Bulgarian, and Turkish ribbon bar wear during the First World War to compare styles and practice with their Central Powers ally. If I had any photographs of WW2 Axis allies wearing German awards on THEIR ribbon bars, I would have included them for the same comparative purpose.

The main focus of this Article is on ribbon bars from 1914 to 1945, but historical background extends that to the mid 19th century as well.

The introductory photograph of this section (courtesy of David Gregory) reveals why:

Major G?nther von Reichenbach (born Thorn 31 December 1863) of Infantry Regiment 140 went off to war in a thoroughly "modern" if still incredibly impractical uniform. His useless leather and sheet metal decorated spike helmet IS covered, but is emblazoned with huge numbers identifying his unit to everyone, including the enemy.

such "Shoot Me First" displays may well have contributed--along with massive and long range firepower--to the deaths in action of almost 1/4 of the German regular officer corps in 1914 alone.

THIS section is to illustrate the human lives behind the pieces of cloth, metal, and enamel.

No images here may be reproduced without explicit and individual permission. These photos, like the entire work, are for sharing with the GMIC collectors' community AT the GMIC website. No display at any other place whatsoever is authorized.