Bavaria What do you know about Bavarian MVK's and MVO's

By dond,
April 17, 2005 in Germany: Imperial: The Orders, Decorations and Medals of The Imperial German States

Another photo shown MVO ribbon worn in button hole. Major Paul Schmitt, he has a MVO3 with crown and sword.       And his medal/ribbon bars, note the different ribbons of war

Hello, the second class is a Weiss from the late period of the war. The MVK crown X is a Deschler. The crosses were made of non-ferrous metal and plated with copper, silver or gold, depending on t 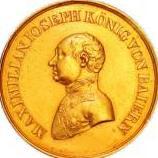