All Death in Bunkers WW1 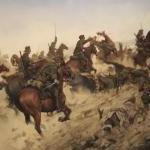