Miniature medal of The Most Exalted Order of the White Elephant 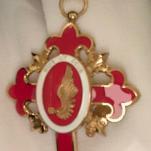