Well - that was a surprise - I got my two readers - so, I have no excuse not to continue !

I was born in early December of 1936 - I didn't know it, but I was to be an only child. Like many married couples my parent's feared the war and held off adding to the family. A pity, I would always have liked a brother or, sister.

From both sides of the family there were military people. My Grandfather had been a senior NCO with the Leicestershire Regt. and was commissioned as a Captain/Quartermaster in 1914 with the Gloucestershire Regt.. He left with the rank of Major. My Father had three brothers - one a regular army officer - one a leading stockbroker - and the other one went to Singapore in 1935 and was missing from the family until 1956. A story for another time. My paternal Grandfather died in 1933 - paralysed - we believe from WW1.
My Father being the youngest son had to stay at home to help my Grandmother look after him.

The Mitton side of the family goes back to the 7th Century - we were invading Angles - later to be joined by the Saxons.
The word Angle - a tribe who settled in Scandinavia from central Russia - gave the name England. My name means the junction of two rivers and that was where the tribe settled in Shropshire. The village of Mitton still exists, as does the Manor House and the local pub - The Myton and Mermaid. Phoentic spelling gives differences - but, we are all related -
although I must say I have never visited - just too many generations apart. 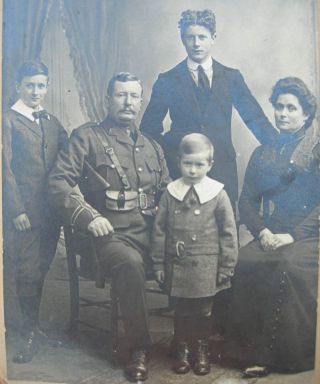 The above picture shows my Father as a 4 year old (born in 1910) - at the front. My Grandparents - the one on the left is Arthur - at the back is George - who went missing - and not in the picture is the eldest brother who had joined-up. My Grandmother was born in India in 1873 and I have recently discovered that her Father at that time was a Sergeant in the Essex Regt. - I have never found out his final rank. She often spoke to me in Hindustani and I still remember a few words.
I have no idea what his final rank was. He was of Welsh descent and in deference to this I was named Mervyn. This is
one of the oldest name in Welsh and means 'son of the sea' - I think I was badly named - I've nearly drowned three times in my life and am not at all fond of water - the exception being that it should be shallow and about the usual temp.
of my bath ! I find Kenya ideal.

When I was born, my Father was involved in horticulture and we lived next door to my Grandmother - a pair of the big 1930 's semi-detached houses that you could buy for about 500 pounds - $ 750. We lived just outside of Bexleyheath - this was originally a country market town and the nearest big centre was probably the City of Rochester. Actually, not a
big place - however, it has a Cathedral and is therefore a City. A very quiet area with not that many houses - we were in a single row, that ran along the top of a steep wooded embankment - at the bottom of this was the Rochester Way.
The embankment and the main road will feature as it was the main road to Dover - a main embarkation point for troops.
This happened in1939/40 and again in 1944 with the re-invasion of France.

So, you now know a little about me - where I lived , and my immediate family.

You will have to wait - with bated breath - for the next instalment .