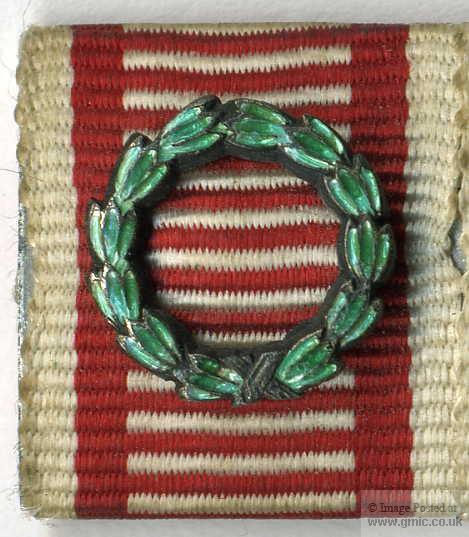 There was no Austrian war award which actually HAD a round green enamelled wreath like this.

This is on a 15mm German-style ? wartime/? 1920s Austrian ribbon bar, and from its primary positioning and the other Red Cross related awards on the bar, apparently is MEANT to indicate a Franz Joseph Order-Knight with War Decoration.

That is, a normal Franz Joseph Order, but on the generic Austrian war awards ribbon, here.

Round gold wreaths on this ribbon were common for German recipients of the Austro-Hungarian Military Merit CRoss 3rd Class with War Decoration, which had such a round wreath between the cross's arms. But Austrian recipients virtually never wore such gold wreath devices before the 1938 Anschluss. See the assortment of scans in the Wreath section.