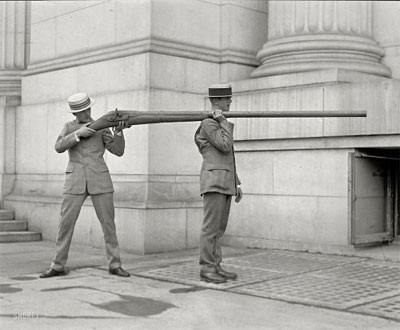 A punt gun is a type of extremely large shotgun used in the 19th and early 20th centuries for shooting large numbers of waterfowl for commercial harvesting operations and private sport. Punt guns were usually custom-designed and so varied widely, but could have bore diameters exceeding 2 inches (51 mm) and fire over a pound (??0.45 kg) of shot at a time. A single shot could kill over 50 waterfowl resting on the water's surface. They were too big to hold and the recoil so large that they were mounted directly on the punts used for hunting, hence their name. Hunters would maneuver their punts quietly into line and range of the flock using poles or oars to avoid startling them. Generally the gun was fixed to the punt; thus the hunter would maneuver the entire boat in order to aim the gun. The guns were sufficiently powerful, and the punts themselves sufficiently small, that firing the gun often propelled the punt backwards several inches or more