I haven't really thought what I'm going to write about today. I think we have started to get towards the last two years of the War - and that was not the quiet time that we might have expected. I will probably cover it in two parts.

I have enjoyed writing this - even if it is a little time consuming. I intend continuing until I was 12 and we left to live in Australia. I will cover the trip and stop when we arrive in Melbourne.

I have said before - and will probably continue to annoy you by repeating it at frequent intervals - there is no way to tell how many are reading the blogs. Unless you comment, it could be just the writer !

I was brought up in Australia - did my Military service there. We then moved for four years to South Africa. After returning to Aussie in 1960, I worked in Brisbane for 4 months and was then 'head hunted ' to work for 3 1/2 years in Thailand. I went back to UK and was then asked to run an advtg. agency in Sierra Leone - West Africa. I then served for 7 years in the Metropolitan Police - eventually running the family business when my Father died unexpectedly. My home in Sth. Africa was a holiday place to visit - but, a few years ago my heriditary Muscular Dystrophy got worse and I am now unable to leave this Country. I have put these details in for a reason.

Would any one of my two readers (?) like me to continue in chapters and cover the different Countries I lived and worked in ? Remember we are talking the 1960's/70's and 80's. The World was a lot different - travel was easier and everything wasn't blocked with tourists. Should I live that long, I envisage the different sections would take about 12/18 months.
Eventually, they will probably be taken to publish as a book - after some polishing.

So, the question is - do you want me to continue this as a series ?

When I started this blog I was 2 3/4 and the War had just started. Now we have reached 1943 and I am about 7 - this is an age when you understand what is going on around you - and I, and my friends certainly did. We read papers, we listened to the radio and at school were given sensible up-dates. No-one treated us as little children - we were all in the same danger and it was appreciated by adults that we needed to know for our own protection.

There were still sporadic bombing attacks and much damage - very few houses were undamaged. Our bedrooms were in the basement and my Father had made shutters to protect us from blast. Sometime during this period we had a severe night raid - I have always slept soundly and sometime in the middle of the night awoke to hear my parents in my room talking to each other. I asked what was wrong and they said the house had been badly hit - and I had slept right through all of the noise. Houses around had also been damaged, but most of the bombs had hit he edge of the Heath and it was blast that had caused the damage. Being Victorian, all of the house glass was 1/4 inch plate (1 inch = 21/2 cm.) The back of the house windows survived - everything else was just splinters - including my lovely pond yacht. That, I never forgave them for.

Needless to say - with all of the shortages - it took weeks / months to get the glass replaced. We were all just thankful that we - and our friends and neighbours had survived. The funny thing was that my little Cairn 'Tess' had not even barked.

There were no carbonated drinks in those days - soda water used a special bottle that was filled at the factory and you took the empty bottle - with it's lever action to the off license for exchange. All bottle were glass - no drinks used tins. The
usual drink was an orange or, lemon cordial which was watered down in the glass. If we wanted a 'fizzy' drink we used to put in 1/2 a teaspoon of Andrew's Liver Salts. Quite tasty - it fizzed and probably kept us 'regular'.

I can remember you could buy Heinz tomato sauce and there was a pickle called Pan Yan - which you can still buy and I am quite fond of. Coca Cola and all of the other things taken for granted today , were just not available. I think they started to come into the uk when the US joined the War and their men wouldn't fight without it. Sweets - as I said - earlier were very rationed. We would usually buy 'Bulls eyes' as they lasted longer.

With clothing being heavily rationed and my allowance going on my school uniform, things like underclothes, shirts and socks were kept in repair and seemed to have a life of their own. I have never worn a pir of darned socks since I started work. The other thing that is taken for granted today is all of the ingredients for a cake. Dried fruit had to come from the West Indies and the ships brought food that was so desperately needed. You know - thinking about it - I don't remember any fat or, overweight people. Other then perhaps people who were ill. The experts say we were the healthiest in our history.

I think Fish required points - but small things like winkles could be bought freely - if they were available.

Things had settled down at school and I was doing fairly well - I was never a brilliant student - I really only remembered the things I had an interest in. English I enjoyed - history is a given and I loved Geography. Maths, I liked the basics - but, algebra and geometry a total no-no. However, I learn't the basics and today can still add up a bill faster then I could on a calculator. For all of the ever present problems I was happy - as only a small boy can be if he has food, shelter and love. This was about to change. 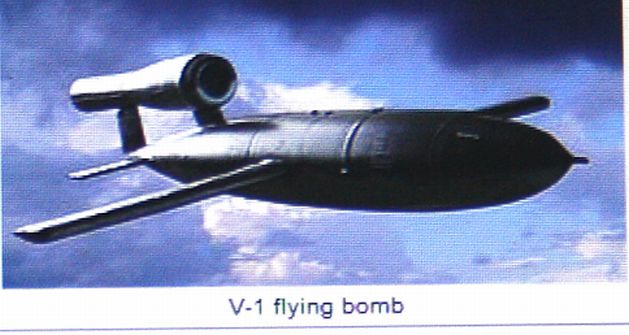 This is an aerial picture of the first rocket to attack Britain. It carried one ton of explosive and was quite devastating in it's destructive ability. Everone knew them as Buzz Bombs - they droned with a steady buzz. However, they had enough fuel to take them over London - when this ran out they became silent. You had approx. 1 minute to take shelter.

They were not a joke - although we pretended they were. They were quite terrifying - whole streets were destroyed by them - and you were in great danger since you didn't know where they would come down. All of a sudden our freedom of movement was gone. Parents were too worried to let us roam anywhere. Fortunately, the RAF learnt to shoot them down - and also to flip their little wings and throw them off course. This helped, but since London was the target we were badly hit. 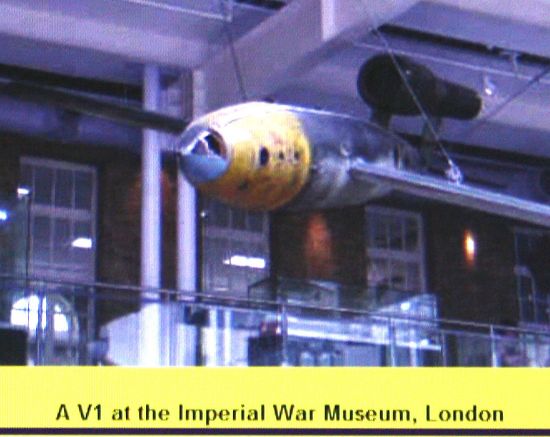 June 1944 was the start of the V1 Buzz Bombs - we would have voted to keep them had we known the sheer terror that was about to strike London from September 1944. This was the V2 Rocket - which came down from a height of 60 miles
(100kms) and at a speed of over 2,200 miles per hour. There was no escape and thousands were to die - they nearly forced an early peace.