I was pleased to see a couple of friends have made comments - I was getting rather discouraged. There is no way of knowing if anyone is actually reading any of this - or, if any visitors are getting through. I intend at the end of today's post to show a number of wartime pictures. I was lucky enough to buy a bound volume of Picture Post - the main weekly magazine which showed the public pictures of what was happening. This covers part of 1940 - but, I have been promised the next five volumes, which will be most interesting. The Govt. placed great importance on this magazine - as can be seen from it having 65 pages - at a time when newspapers had just a double page.

The illustrations will be back a little in the time scale of this article - but cover the Battle of Narvik and also show how the British 'faced-up' in a crisis. We have done this throughout our history - slow off the mark - but determined to fight for our way of life. With so many millions of immigrants in the UK I am by no means sure the same Spirit would prevail - but, in the Falklands I was surprised at the patriotism. Many immigrants are proud to now be British - unfortunately we do seem to have let in a 5th column that could cause many problems in the future.

Enough waffling - what was this little 6 year boy up to ?

When I first went there I had to walk - usually with friends who lived around. Summer was fine - winter, very dodgy. London still experienced dreadful fogs in thos days - mainly from all the coal fires. I can remember us getting lost on many a freezing morning - and we would have to try and find a shop to take shelter. Sometimes people would see us and take us into their homes. Telephones were rare - and not a lot of people had them at home - this meant you could not easily call for help. I sometimes wonder if 6 year olds today would cope as well as we did ? There were some public telephones and my Father always made me keep tuppence (two pennies) in a separate pocket - that was the price of a public call. We were lucky and had inherites a fixed phone line.

The other problem that faced us was slippery ice and snow. Salt was hard to get and it could be dangerous walking.
Having reached school, there was very little heating - they did their best but it was heavily rationed and being an old school the windows were 18 feet high (6m). These poles were very dangerous - one or, two of the teachers would balance them on their desks - which were on platforms. When they asked you a question they moved the pole over you -
get it wrong and they dropped it ! 6/7 years old and we had a heavy pole dropping some 25 feet onto our heads. Looking back, I realise that some of this was unnecessary brutality. One teacher - the maths - carried one of the old ebony rulers - make a mistake and he smashed it over your hands. I often wonder how many of my classmates suffer today with arthritis ? The worst was our Latin teacher - a small French refugee - he carried a long length of hosepipe in his robe. Make a mistake in a Latin declension and he would seize us by our necks and strike us all over our bodies.

This came to a head when I was about 7 - I still used to wash in the kitchen sink - it was one of the warm rooms in the house. Naturally, we had just put up with this violence - however, my Mother saw the double welts a hosepipe leaves and called my Father. I had at least 12 serious double bruises. He was up to see the headmaster the next morning and ended up taking him by the throat to get action. Brother Polyanthus was quickly transferred and the bullying slowed down. This is why I said earlier I had mixed feelings about St. Joseph's. My family are High Church Protestant but, the
school was Roman Catholic they did not want Protestants and we were exiled during the first period Religious study.
Funnily enough - I have only good feelings about the Cathoilc Faith - I nearly converted at one time - I think it was just a lack of discipline and boredom that led to the ill treatment. When I was a Home Beat Police Officer (Community Constable) in the East End of London I always paid particular attention to the children and would question them if they had marks or, bruises.

The Germans wern't bombing us every day - and we had adapted over the years. There was nothing untoward in running to a shelter when the sirens went off - we recognised the different bombers and we knew all of our planes and cheered them on. I have watched many egagements fromt he back garden. Food shortages were part of life and were rarely mentioned - usually only when we had a special treat.

I eventually learned to ride a bicycle and had a kid's 1/2 size one. My friends had also learned and this gave us mobility to visit each others homes. One of my friend's from those days funnily enough a David Wolfe - owns one of the biggest clothing chains in Greenwich but, someone told me this - I haven't seen him since I was 12. We both collected Dinky toys and there was great competition between us - he got more pocket money then I did, so was usually ahead.

The popular sport was Rugby and that was where I learned to play. I wasn't very good at it - I wore corrective glasses with prisms and they were difficult to focus. I do remember we were on the rugby field playing a knock-up game when bombers were spotted overhead - the sirens sounded after we saw them - which was not unusual. They were dropping their loads and all hell broke out. 40 or 50 kids had to be rounded up and dragged off to the school shelters. Whistles were blowing all over the place and all of the teachers had turned out to get us - we thought it was good fun ! That is
what I mean when I say even the strangest events can become common place over time.

Life - as it does, continued for us over the next year. THe British were preparing for the Invasion of France and , of course, the US had joined-us. Very welcome as I think we had begun to run out of steam and resources. Rationing had
become more severe and it was a struggle to be fed and to have decent clothes. One advantage I had, was that near the school was an ABC Cafe. These were opened by the Govt. and were intended to help people have a decent meal at least once a day. Schoolchildren were particularly welcomed - along with pensioners and people doing manual labour.
I don't remember the food being terribly good - but, it was nutritious and healthy - and if I remember cost 6 pennies. (six pence.)

I will close for today - I need space to show the pictures from 1940. However, the next chapter will cover my experiences when the bombardment of London re-commenced with the V1 and V2 Rockets. This really was a terrifying time for everyone - civilian and service personnel - something those of us who went through it, have never forgotten.
Whilst I have come to terms with the ordinary German people who were the prisoners of their own Government - I have
never forgiven the deliberate attack on London and the lives that were lost so viciously - the perpetrators should have all been shot out of hand - but as seems to be the way of the West, most got off with small sentences and the Americans
actually gave Walther Von Barun - the man who invented them - sanctuary in the US - he was never even brought to trial. 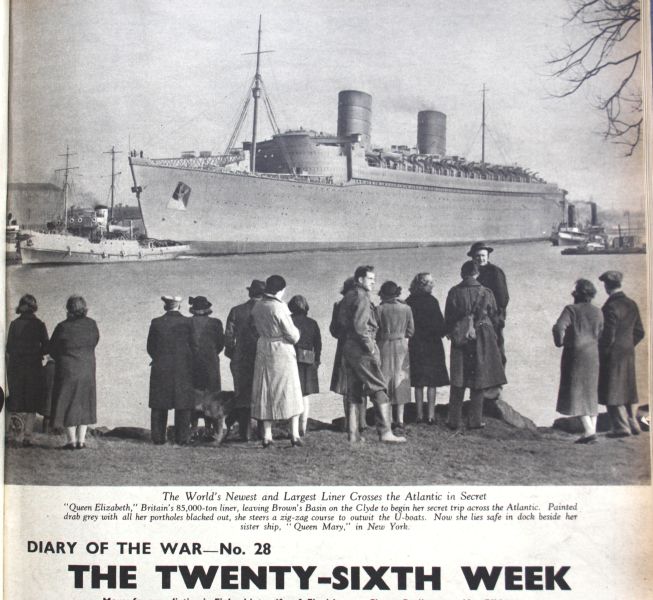 This was one of the great pictures of the time. It showed we were still a powerful Nation. 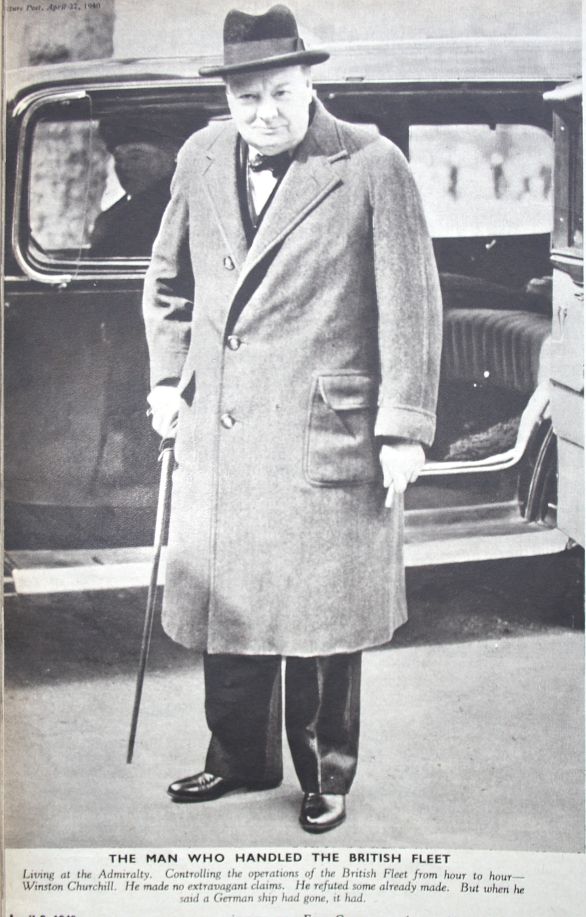 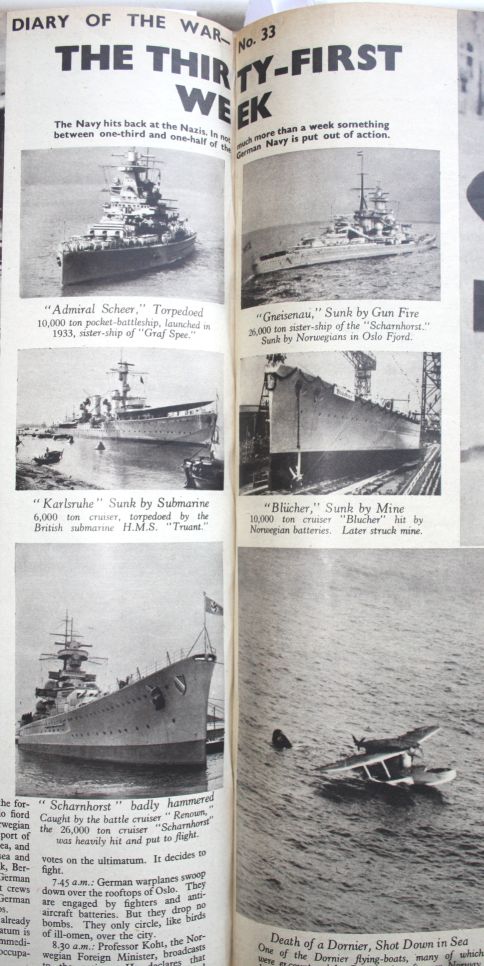 Some of the German ships we sank at Narvik 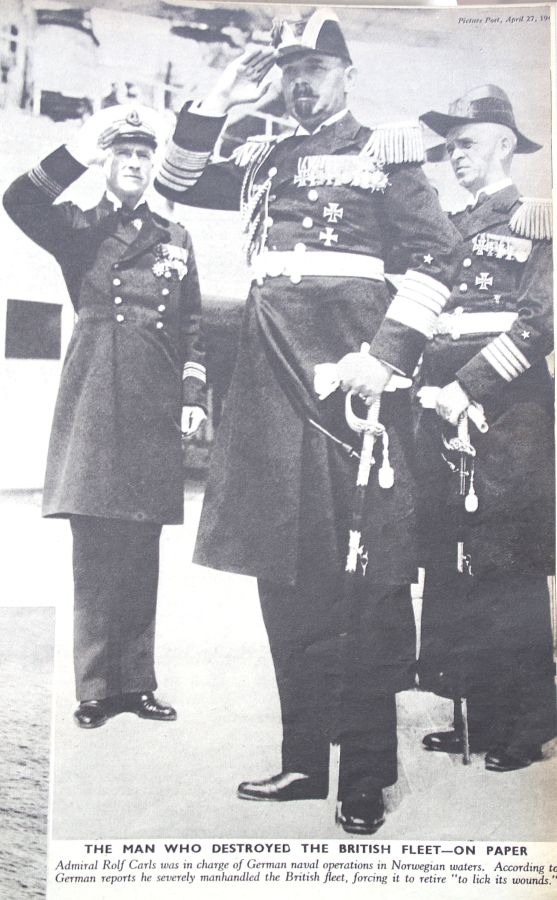 This was the German Admiral at Narvik 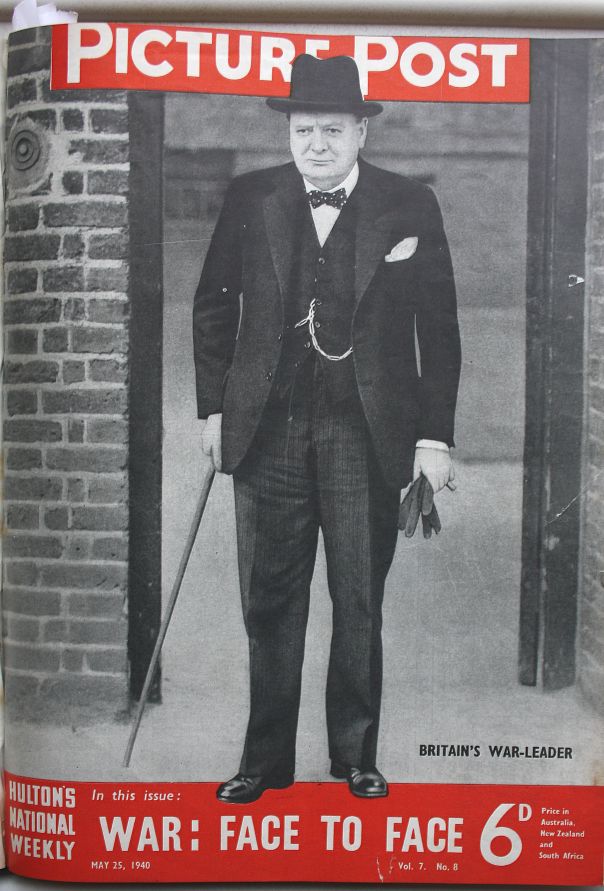 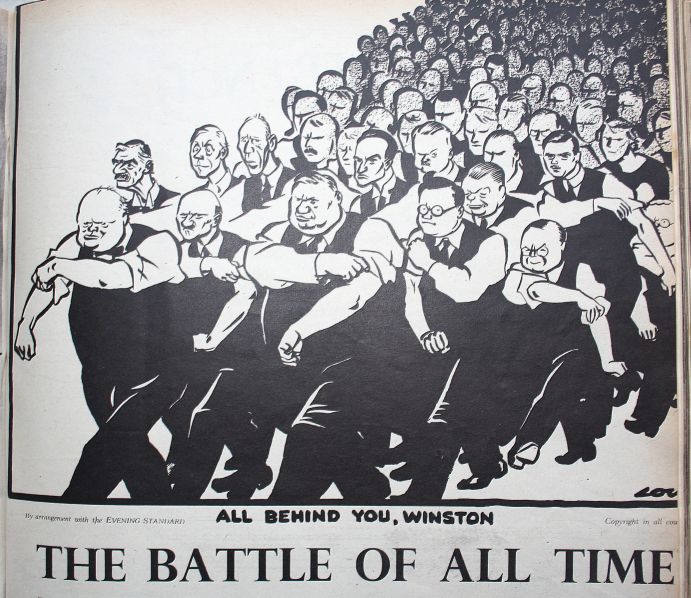 A cartoon by the very famous cartoonist LOW. Showing all the members of the cabinet behind Churchill 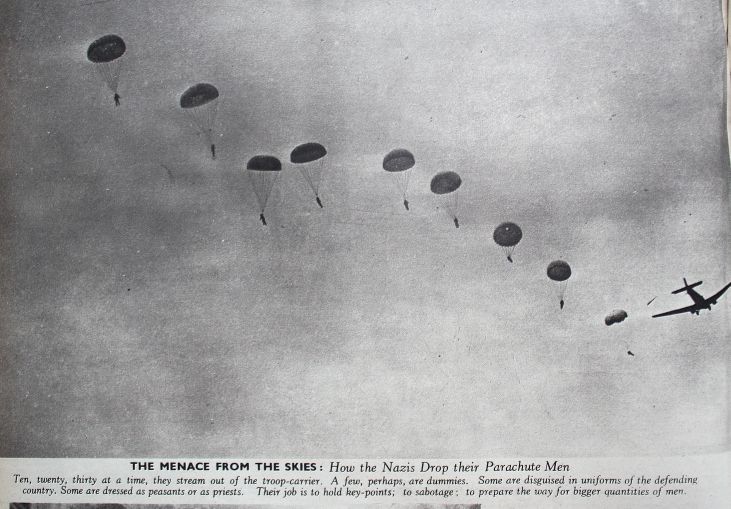 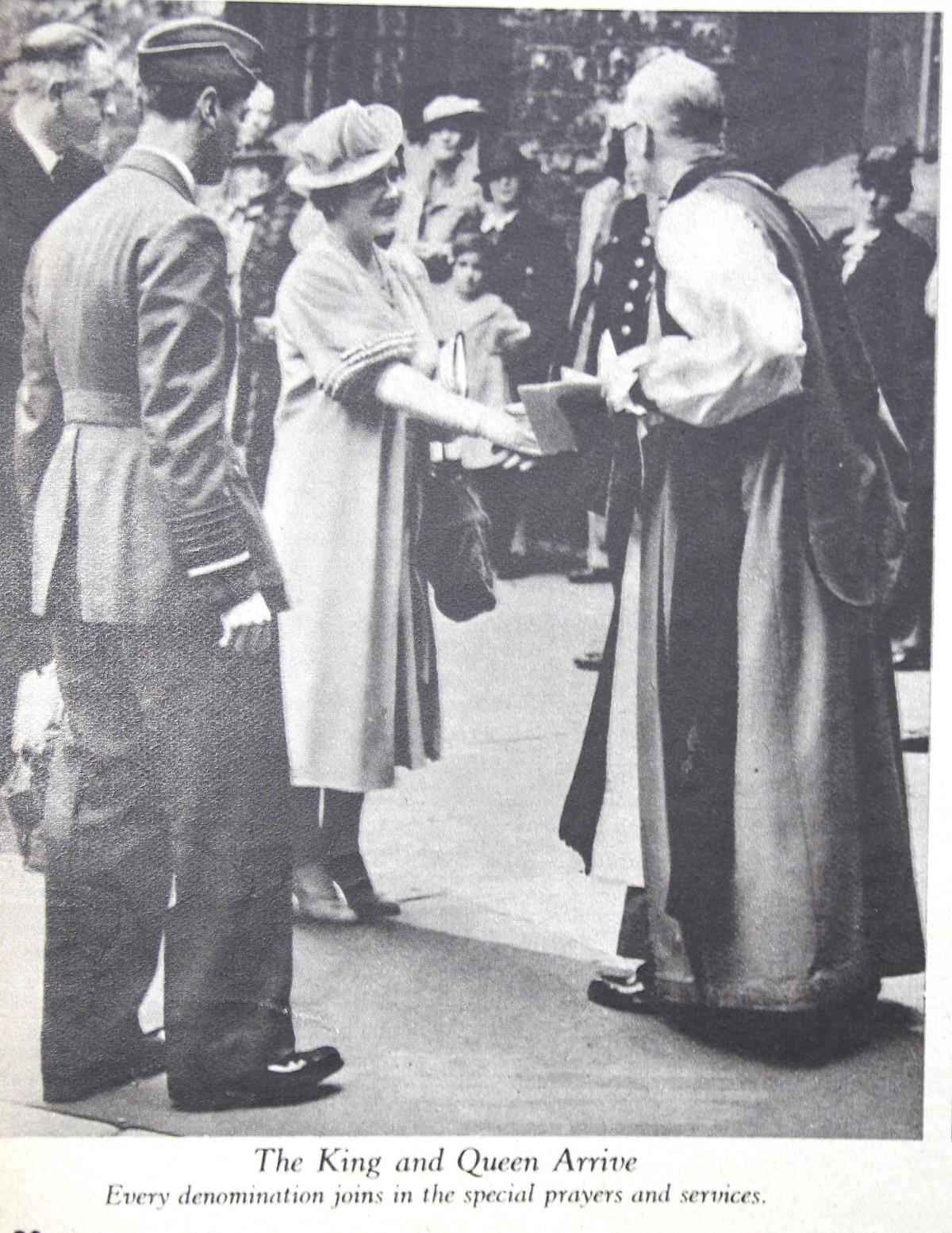