November 11 is Remembrance Day here in Canada, a day where we remember and honour those who have and are serving their country.  During this time we, like people in many countries around the world, wear a poppy in honour of the fallen and those who served and still serve in our armed forces.

I felt it timely to post the protocols here in Canada for the wearing of the poppy and welcome the members to add anything regarding this practise in their own country.

1.   Do not change the pin, not for a safety pin to prevent loss and not using a flag pin in place of the original. If you would like to prevent the loss of your poppy, as often happens, let me suggest that you take a piece of wide elastic or rubber band, fold it in half and pierce it with the pin.  When you pin the poppy on take this piece of rubber band install it on the pin, sliding it up to the closest possible point where it cannot be seen and your poppy will be secure.

2.   Wear the poppy on the left lapel. No lapel? Then wear it on the left side (same side as your heart, unless you are an alien from outer space then you are on your own).

3.   Wear the poppy from the last Friday of October until the end of the day on November 11. You can wear your poppy respectfully at other times such as funerals of veterans or official ceremonies.  Some wear it all year around stating, when challenged, that they remember their service people all year and not just on Nov.11.  For the most part I call B.S. on this statement.  I’ve seen poppies worn on greasy dirty old hats and you know that the poppy, being as dirty as the hat, that no thought was given to its significance once it was originally placed there. On your hat in the middle of your forehead is not on the left lapel, Buddy.  Before anyone replies with a scathing message let me just say ahead of time, “Yes, you are one of the few who honours our soldiers every day you get out of bed and before you say your nighty nights to your loved ones every night.  You are in no way feeling indignant and self-righteous and you do not wear the poppy to let others know how sanctimonious you are”.  Yep. I’m a bastard.  There I hope I saved someone a little time.

4.   Anyone who is honoring our veterans can, and should, wear a poppy.

5.   How many can you wear?  I would have said 1, until I saw a photo of Queen Elizabeth wearing several at a ceremony and checked the Canadian protocols, which I am sure, would echo the British protocols.  Besides if Her Royal Majesty wears more than 1 poppy then it just can’t be wrong. Is my monarchism showing?

6.   How to dispose of your poppy. You can leave it at the memorial or cenotaph at the end of the day on the 11th.  Many will leave them on the cenotaph after the service, commencing at 11 o’clock, as a sign of respect. This has always been a problem for me the few times I have not attended the services. Like worn out Canadian flags I tend to place them in a box and store them away as I just can’t seem to bring myself to tossing them out.  I feel it is an insult to those I just honoured, but that just how I feel.

Whatever you do with your poppy at the end of the day, DO NOT reuse them!

A number of years ago when I attended my first Remembrance Day ceremonies, in full uniform, which included the Royal Canadian Mounted Police, Regional Police Services and the Fire Department I recall standing at attention while they played The Last Post.  My eyes started to well up with tears, which is odd as I am not known to show emotion.  I was wishing I could hold them back when I strained my eyes to my left (we were at attention remember) and next to me was an RCMP officer who must have stood 6 foot 4.  Tears were streaming down his face; there went any chance of me remaining my usual stoic self.

If you are able please attend the Remembrance Day services in your area, it means a lot to those who have and are giving so much for us. 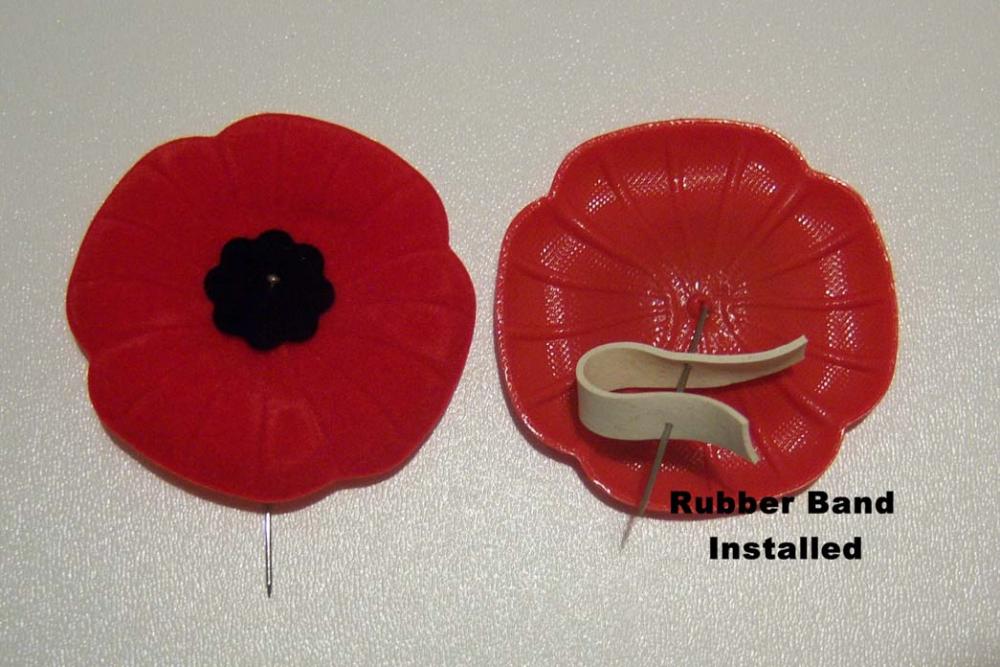