This time, I want to get simething a bit different from the Romanian military history, and discuss about its allued from the first part of WW2, Germany and its tanks. Not any german tanks, but the huge projects P.1000 "Ratte" (the Rat) and P.1500 "Monster". Hitler, being a veteran of the Great War, had an obsession for oversized weapons, such as the Maus super-heavy tank, "Gustav" and "Dora" 800mm supercanons, the "Flack Towers" and many others. From this obsession were also born the projects for P1000 and P1500.

The Ratte is known for its enormous size: it would have weighed 1,000 tonnes, five times the weight of the Panzer VIII Maus. The divided weight of the Ratte included 300 tonnes of armament (the total weight of the guns themselves was 100 tonnes, so turret armour would have weighed 200 tonnes), 200 tonnes of armour and frame and 100 tonnes of track and automotive components, while remaining weight would be distributed to miscellaneous features. It was planned to be 35 m (115 ft) long (39 metres (128 ft) when including naval guns), 11 m (36 ft) high and 14 m (46 ft) wide. To compensate for its immense weight, the Ratte would have been equipped with three 1.2 m (3 ft 11 in) wide and 21 m (69 ft) long treads on each side with a total tread width of 7.2 m (23 ft 7 in). This would help stability and weight distribution, but the vehicle's sheer mass would have destroyed roads and rendered bridge crossings next to impossible. It was expected that its height, and its ground clearance of 2 m (6.6 ft), would have allowed it to ford most rivers with relative ease, thus eliminating the need for bridge crossings. Planned propulsion was by two MANV12Z32/44 24-cylinder marine diesel enginesof 6,300 kW (8,400 hp) each (as used in U-boats) or eight Daimler-Benz MB 501 20-cylinder marine diesel engines of 1,500 kW (2,000 hp) each (as used in E-boats) to achieve the 12,000 kW (16,000 hp) needed to move this tank. The engines were to be provided with snorkels, also like those used by German submarines. The snorkels were designed to provide a way for oxygen to reach the engine, even during amphibious operations passing through deep water. The Ratte's primary weapon would have been a dual 280 mm SK C/28 gun turret. This was the same turret that was used on the German capital ship Gneisenau but modified by removing one of the guns and its associated loading mechanism. Removing the third gun allowed extra accommodation of ammunition, and reduced the total weight of the tank by 50 tonnes. The guns used for the Ratte would have fired ammunition developed for other naval guns. It also included armour-piercing rounds with 8.1 kg (18 lb) of explosive filler, and high-explosive rounds with 17.1 kg (38 lb) of explosive filler. Further armament was to consist of a 128 mm anti-tank gun of the type used in the Jagdtiger or Maus, two 15 mm Mauser MG 151/15 autocannons, and eight 20 mm Flak 38 anti-aircraft guns, probably with at least four of them as a Flakvierling quad mount. The 128 mm anti-tank gun's precise location on the Ratte is a point of contention among historians, most believing that it would have been mounted within the primary turret, with some others thinking a smaller secondary turret at the rear of the Ratte more logical. Some concept drawings exist to suggest a flexible mount on the glacis plate. The tank was to be provided with a vehicle bay that could hold two BMW R12 motorcycles for scouting, and several smaller storage rooms, a compact infirmary area, and a self-contained lavatory system. The large size and weight would have rendered the tank unable to cross bridges at the risk of collapsing them, and travelling on roads would soon destroy them. Though its top intended speed was 40 kilometres per hour, its huge size and high visibility would have made it extremely vulnerable to aerial bombardment and artillery fire. Its great size would also have made it nearly impossible to transport—no existing railway or train car could bear its weight and its width was too great for existing tunnels.

This "land cruiser" was a self-propelled platform for the 800mm Schwerer Gustavartillery piece also made by Krupp—the heaviest artillery weapon ever constructed by shell weight and total gun weight, and the largest rifled cannon by calibre. This gun fired a 7-tonne projectile up to 37 km (23 miles) and was designed for use against heavily fortified targets. The Landkreuzer P. 1500 Monster was to be 42 m (138 ft) long, weighing 1500 tonnes, with a 250 mm hull front armor, four MAN U-boat (submarine) marine diesel engines, and an operating crew of over 100 men. The main armament was to be an 800 mm Dora/Schwerer Gustav K (E) gun, and with a secondary armament of two 150 mm sFH 18/1 L/30 howitzers and multiple 15 mm MG 151/15 autocannons. The main armament could have been mounted without a rotating turret, making the vehicle a self-propelled gunrather than a tank. Such a configuration would have allowed the P. 1500 to operate in a similar manner to the original 800mm railroad gun and Karl 600mm self-propelled mortars, launching shells without engaging the enemy with direct fire.

Development of the Panzer VIII Maus had highlighted significant problems associated with very large vehicles, such as their destruction of roads/rails, their inability to use bridges and the difficulty of strategic transportation by road or rail. The bigger the vehicle, the bigger these problems became. Propulsion had also proved problematic in the development of the Maus: The prototype had failed to meet its specified speed requirements which meant that even larger vehicles such as the P. 1500 were likely to be slow-moving. 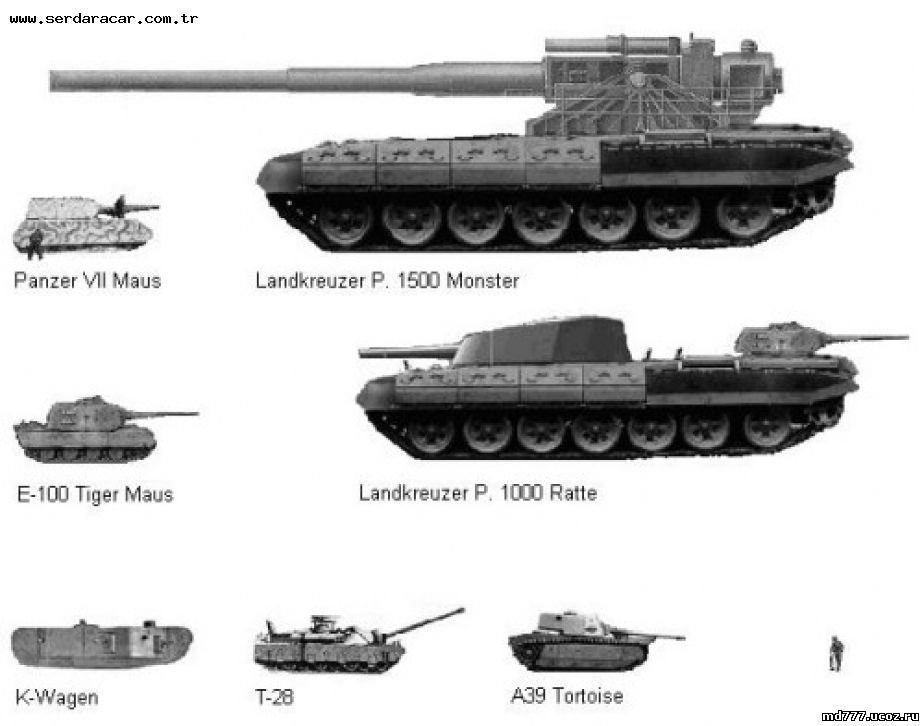 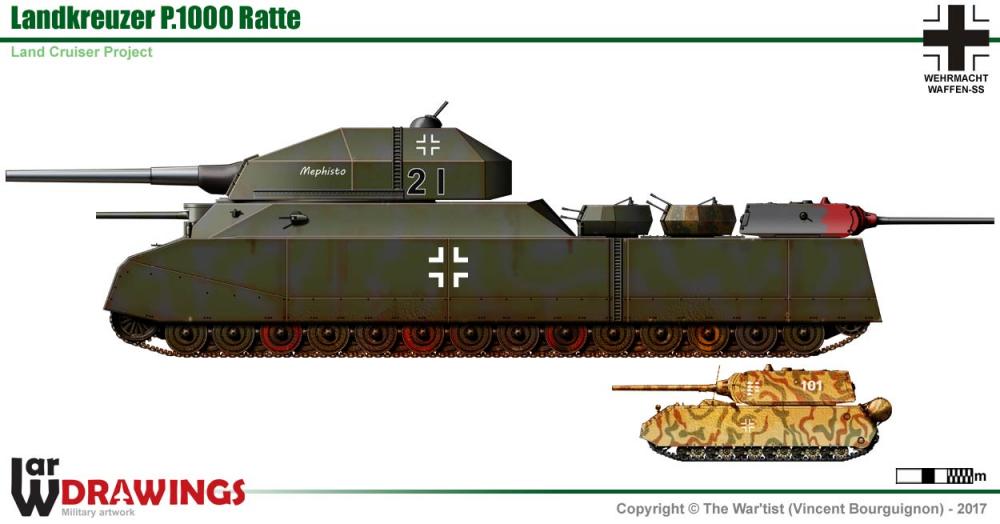