There have been some delays in finishing this Blog. The extension to our Photographic Competition took longer then we had expected. However - here are the final two parts to this section of my life - the younger part !

I covered in earlier chapters the damage to life and property created by the German V1 and V2 rockets - looking at the map
which shows detonations I am amazed that any of us survived. However, after the D-Day landings in 1944 the German schedule was interupted and gradually the Rockets became less frequent.

Shortages were something that we had learned to live with - which was just as well since they continued to get worse - not better. School and the usual activities of an active group of schoolboys did not allow for introspection - we just got on with life.

With the Allied and US advances continuing the press seemed to give out more details and we all followed events closely on large maps. I remember at school that in the main Hall we had a particularly large map and everyday map pins - in different colours - were used to show advances and set-backs. I don't think I ever saw it without a crowd around and we certainly knew our European Countries.

HOW LIFE HAD TO CHANGE:

Even with clear memories of the period I still find it difficult to describe a total absence of any lights at night - of public
transport being fragmentary and really only used in daytime - at least by us younger ones. My Uncle - who was a wealthy stockbroker , used to take me to his home in Somerset for a few weeks each summer. We had to travel on a steam train - which would be packed to capacity with servicemen. He and his City friends were - of course - First Class and we had seats. I always thought this was wrong and even at 8 years old used to say we should let people into the carriage.

The other thing we learnt to live with was the terrible bomb damage - wherever you looked buildings had gone - streets
were in tatters. Paint was very scarce - so, buildings all looked dirty and decayed. Even during the War , my parents would take me once a year to central London to get school uniforms and look for presents. My favourite shop at that age was Gamages - who had a lovely pet section. I think it was for Christmas 1944 we made the expedition - only to find it had been bombed totally flat - just gone !

Victory in Europe Day had been building for quite a while - the newspapers and the radio were reporting our succeses
and the atmosphere was 'not if' - but 'when'. This still didn't really mean a lot to us - we just had no idea of what 'normal' life was. For example - I had never seen or, eaten a banana. I had never seen a coconut - just so many things.

May 8th 1945 the War was declared over in Europe - that evening lights were switched-on. That was a shock to a small boy who had never seen street or, car lights. My Father had a small petrol allowance for the business and he had saved some coupons. A few days after, we joined heavy traffic to drive to the West End of London and see Piccadilly Circus - and with all of the old pre-war neon signs on. WOW ! We were easily pleased.

The crowds outside of Buckinham Palace and Downing Street are still something used for comparisons. I will show a number of pictures from this time. The story will continue for one further chapter to 1949 when we emigrated to Australia.

A V2 rocket on display in Trafalgar Square in 1945. St. Martin's in the Field and South Africa House in background 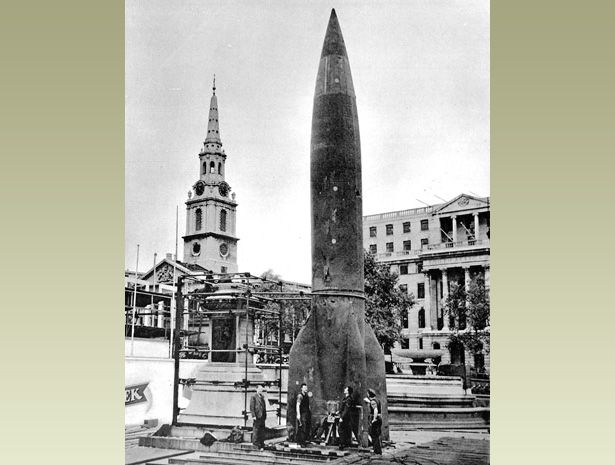