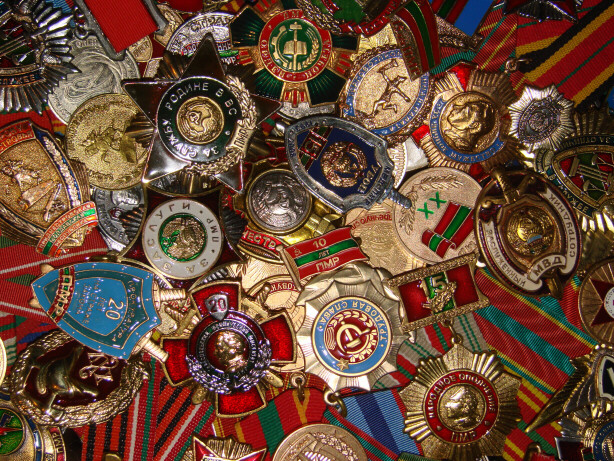 Recognized Swag from an Unrecognized Country

It is amusing that one of the largest collections I have is from a country that has yet to be recognized; the Pridnestrovian Moldavian Republic. This nation, also called Transnistria ("across the Dniester" in Romanian), is composed of the ethnically Russian community of the former Moldavian SSR who, upon being notified of their government's decision to break from the USSR in 1990, chose to separate from what became known as Moldova (ethnically Romanian). In the words of the PMR's first president, Igor Smirnov, "we did not leave the Soviet Union". A hot war ensued in 1992 and a cease-fire was brokered by the Russian 14th Army which has held to this day. In spite of having it's own government, military, police, customs, banking system, mint, etc. it remains unrecognized except by other break-away countries such as Nagorno-Karabakh, Abkazia and South Ossetia. I wonder if it is because of their adherence to their "traditional" symbols (the hammer and sickle- although Communists hold no seats in the government) or because Russia said they would put a missle base there if the US puts a missle base in Romania...?