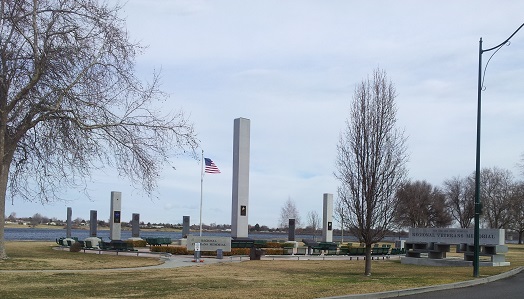 Three Sierra Nevada white monoliths are vertically erected across the plaza center axis equidistant from one another to show respect to veterans, denoting the stature of their service on plaques bearing gold, siver, and blue prismatic stars.

The Veterans Memorial plaza centerpiece, a great 44-ton slab of granite and at 40 feet in length, erected vertically, now stands as the tallest freestanding single piece of granite in the United States. And, at that proportion, likely to achieve national prominence. The great monolith was erected utilizing two huge cranes in tandem. Twenty concrete filled steel pipe pilings driven to refusal and capped by immense concrete footings support the monolith.

The didactic element is manifest in six black Impala granite pieces quarried in Africa, each bearing a seal of one of the six branches of the service, Army, Navy, Marine Corps, Coast Guard, Air Force, and Merchant Marine. These symbolize the combined might of the Armed Forces, arranged as sentries, shoulder-to-shoulder to surround, support and protect the flag of the United States and all for which it stands. Moreover, it conveys the full measure of pride and honor of service to our country.