I said in Part 1 that Peel House may have been the first Metropolitan Police Training School.
I was right and a little research showed that it was first opened in 1907. Strange that I was
there for it's final two weeks in 1967. I think it may have been kept for Police offices and
was only sold a few years ago for a large new flat development. One has to compare all of
these sales of Police property as 'selling off the family silver'.

Over the years I have seen so many 'bright' new officers arrive - all with one idea - get noticed.
First it was armbands - then an attempt at whistles - then truncheons. These are just the
noticeable ones - but, the effect is the same. When you have changed all the traditions - sold
all the buildings - changed the teaching disciplines - what are you left with. 32,000 men who have
lost their links with an important historical past - and the morale which uniqually made them
one of the most important Forces in the World.

The new Peel House is the Admin. building at the re-built Hendon Police Training College. I am
showing a picture of the very impressive central tower - totally different to the Hendon of my
day - then it was mainly one level buildings and in a smaller area. 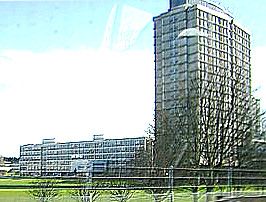 
Built-in the 1930's the first College was the idea of Lord Trenchard who was the Metropolitan
Commissioner at that time. Like very many senior ex-service officers' of that period, it was
thought that only people from 'background' should be officers. He set-up Hendon as an Officers
Training School - along the lines of Sandhurst - but for training officer's of police.

There were quite a number who graduated as Inspectors. However, World War 2 happened and
Hendon was closed. When it re-opened after the War it was for training Constables.

The Police have always promoted from with-in their own ranks - although the Commissioner
and Chief Constables were often brought to the Rank from senior Army officers. When I first
joined the Commissioner was the first to be promoted to that rank from starting as a Constable.
His name was Simpson and he was a very good influence on the Met. and highly regarded.
I think all senior positions from that time have been police promotions - although, often from
other Forces.

The Commissioner of the Metropolitan Police is the most senior officer in
England and Wales - he is followed by H. M.'s Chief Inspector of Constabulary and third in
seniority is the Deputy Commissioner. Chief Constables rank below these officers.

I think my class were the very last ones at Peel House - unfortunately, Hendon was still not
ready for us. We were put into temporary accomodation above a Police Station in North
London - still bussing it daily like a group of uniformed vagrants.

After about five weeks of this nonsense Hendon found us a billet - they had quickly taken
over the Commandant of Cadets house in the officers section, and installed the twenty of us
at 4 per room. One bathroom and one toilet between us - I'm still not sure why I didn't run
away ! I used to get-up at 5 a.m. to have a bath. As for the Commandant of Cadets - I
never did find out what happened to him - they probably had him in a tent in the park......

Life could now settle into a harried routine of classes , studying in the evening and then
preparing uniforms and shoes for early morning parade. How this must 'ring a bell' for all of
the servicemen in the Forum who will have gone through something similar.

One of the larger items we were given with our uniforms was the ' dreaded' Instruction Book.
This probably weighed well over a kilo and had ring binders. A large envelope was attached
with all of the revisions - endless evenings of work. Even worse, we had to learn - word perfect -
the provisons of the various Acts.

When you make an arrest you do so from your knowledge of the Law. Lawyers have the luxury
of being able to prepare their cases with plenty of time. A Police Officer does not have this
- you may have only seconds to make a decision - get it wrong and there will be
serious problems. So, it is vital that a Constable knows his law and understands what powers
he has been given. I should add - that often , having made a decision, you then find yourself fighting them amongst parked cars.

When I joined, the course to become a Constable was thirteen weeks in length - then two years
as a probationary Constable. This was under the supervision of a designated Sergeant, who was
your advisor - and, you also attended for two days a month, for instruction - this was at special
buildings attached to a Divisional Station.

The end of Week 13 had a passing out parade - your official class photograph - and the posting
to your Division. We were allowed to ask for the Division you would like to be posted to - and
we all had our own thoughts on this.

This was still in the future - for now, I was just a number.