A Member kindly told me recently, that this Blog is a part of Social History. I hadn't thought of
it in this way - however, I suppose it will prove of interest to some Police researchers and
perhaps, younger Policeman. The simple fact is that this happened to me personally, 47 years ago !

Since I was to spend the next 7 years there - here is a little history on the area.

The East End of London is to the left of the Tower of London - if you were facing the River Thames.
Originally - in the time after King William 1st. (1066) it was reserved as a hunting area for the King.
Gradually, it became a number of small market gardens , producing fruit and vegetables for London.
However, large parts still belonged to the Sovereign and were administered by the Crown Estates.

The whole area was quite run-down and in 1968 large parts still had serious bomb damage from
WW2. Despite the poorness of the area, most people were still staunchly Royalist - and some-what grudgingly, accepted 'us' , as 'their' police. I have always found it strange how people's
opinion of the Police changes quickly when they need help. 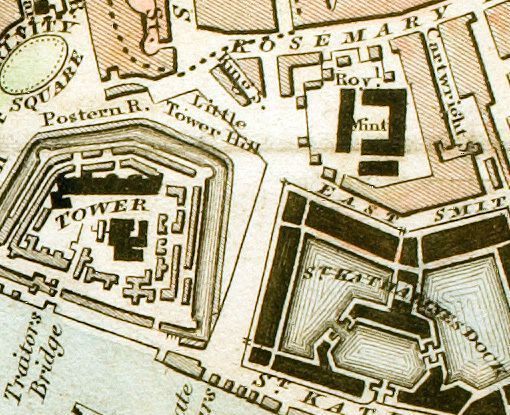 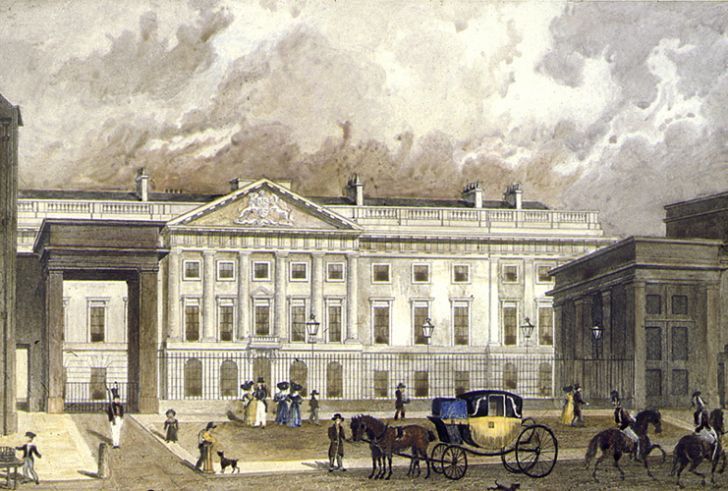 The Royal Mint used to be on the left of the Tower - and was there for many years , before going
to Wales in the 1970's. Prior to that it was with-in the Tower. The area around the Mint was an
ancient one - still known today as the Minories - it was in fact an Abbey for the Minor Prioresses
of the Order of St. Mary - created in 1494.

Sometimes distinguished people who were beheaded in the Tower , were allowed to be buried with-in the Minories. This beheaded scull is believed to be that of the Earl of Suffolk -- Lord Grey. He was the Father of Lady Jane Grey who seized the Thone for nine days. They were both beheaded. 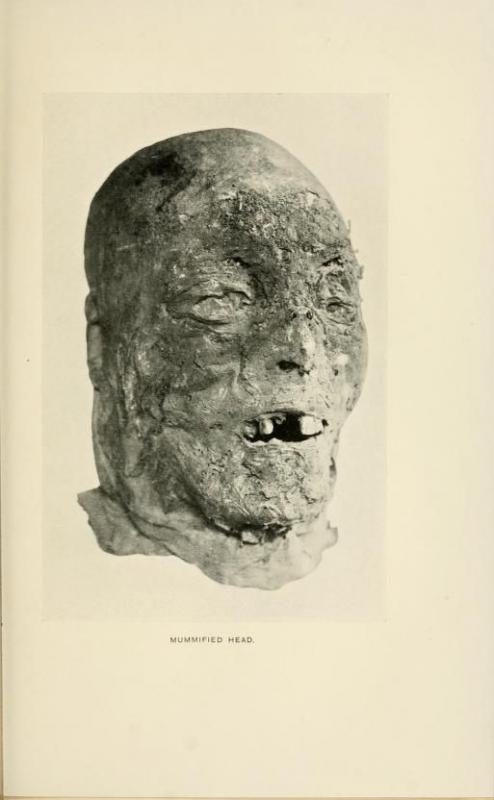 When I was at Bethnal Green, the Governor of the Mint had the 'bad' habit of calling an 'Emergency'
and then standing at the gates with a stopwatch. You had 3 minutes to get there ! I can
remember some very frightening 80mph (140kph) across the East End to avoid an enquiry . The
Area Car for HB had the call sign 'Hotel 2' - perhaps it still does ? It was one of three fast pursuit cars for the Division. They were Jaguar 2.4's at that time.

Moylan Police Section House was on a small turning off of the Ratcliffe Highway . This was an old
road that ran between the Tower and the Isle of Dogs and the West India Docks. Because it was an important road - with numerous cross-roads it became known for it's illegal burials.

Suicides and executed people were not allowed to- be buried in Consecrated soil. The few that were allowed at the Minories, probably cost a great deal of money. The next best thing was a
cross-roads - with it's shape as a Cross. Also, in this vicinity was the important Parish Church of
St. George's East - it lay alongside the Highway. Over the years many bodies were buried at night - and are still often found when the road is dug-up. 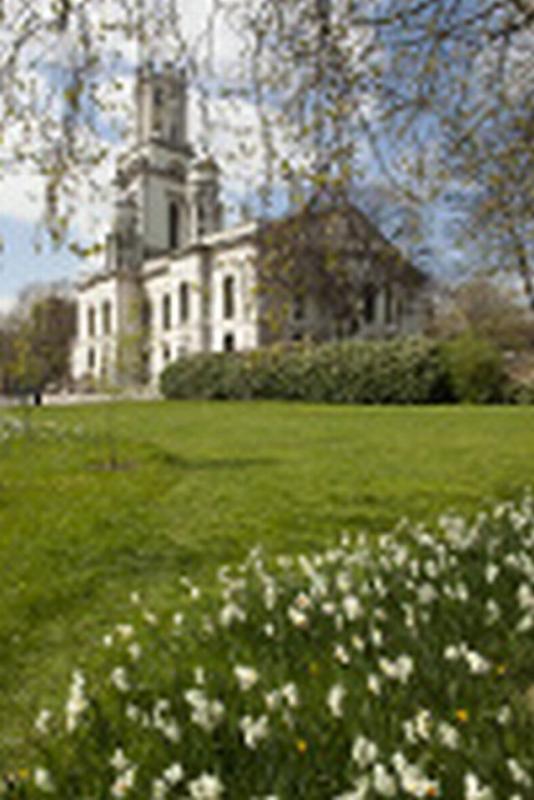 These two tipstaves for St. Georges date back to
1848 &9. Given each year by the Churchwarden
to the in-coming Parish Constable

Having always had an interest in History I found the whole area to be full of old monuments and
buildings. Should we continue with the Blog I will talk about some of the 'hidden' areas - the
thing with London is that we have over 2000 years of continuous habitation and in the older parts
so much of it has survived.

Having settled in at the Section House, I had quickly discovered one serious problem. No under-
cover parking. I had a Triumph TR4a sports car with a canvas hood at that time and quickly
realised that it wasn't suitable. I changed it for a Singer Vogue - same as the Hillman Minx , but
a little more varnished wood on the dash. A great car and although I missed the exhaust note of
the TR - and the acceleration, it never let me down and with a friend from the Station we took
it on a trip right through Spain and Morocco.

With the Section House we each had our own rooms, a nice canteen , TV room (if you liked Football...) laundry rooms and a small yard for cycles. A Sergeant was in overall charge.

These Houses were an idea from Victorian times - they gave young constables somewhere to
live - and in an emergency a considerable body of men were available at short notice. We shared
large bathroom facilities and I have quite fond memories of the place. We were from Stations
all over the Division so, it was a way to make friends - and find out the 'gossip'..............

Bethnal Green's call sign on the radio was in the military alphabet - 'HB' - 'Hotel Bravo'. This
stood for Bethnal Grren Police Station and 'H' Division. The Station has moved now, so this may
have changed. However, I will in future use these initials for Bethnal Green. Incidentally,
a Bethnal - in medieval language was a mental hospital.

Any new person , to any job, is wise to take things slowly and let people get to know you. I think
this is advice some of new members on GMIC should remember. I know it took a few months until
all of the older PC's gave full acceptance.

For the first month new Constables are posted with an older, experienced Constable. This period is
called 'Teaching Beats'. He sets the hours and you are separate from normal activities. The idea
is for you to learn the streets and the area. Also, to deal with as many different incidents as
possible to give experience.

I was with a 20 year service Constable - we will call him Jock. He was to become a good friend and knowing the 'job' so well, was a great mentor. He certainly knew every place we could get
a cup of tea on a cold, wet day !

I was amazed to find that we had three of Jack the Ripper's murder sites on our Ground (meaning
our Station's area) There were always members of the public asking for directions - and if we had
time it was nice to spend a little time telling them local history. One site - the house in Hanbury
Street - was still exactly the same as the full page drawing in the Illustrated London News from
1888. This was where Annie Chapman was dismembered on 8 Sept. 1888 - the address
was 29 Hanbury Street. Developers later pulled it down - but, I have been told that it is to be re-built ? 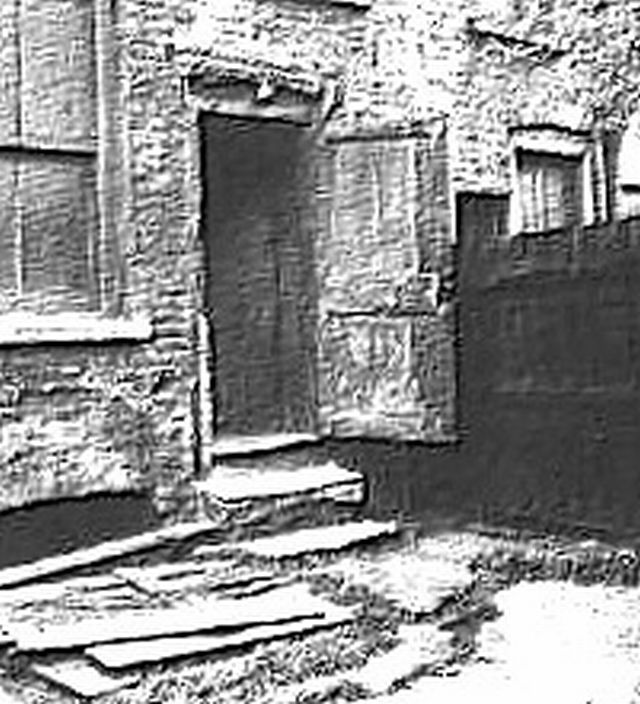 The backyard. She was killed at the bottom of stairs.

We were walking back to the HB one morning when we spotted a big old Cadillac - mind you, it was probably new in those days. Bright pink and with the tall tailfins. It was parked outside a house
in Vallance Road - where the Kray Brothers Mother lived. We walked over and were looking at the car when the Kray twins - Ronnie and Reggie - came out. We spoke generally and they wished me well. They hated the CID but, were very careful with Uniform Branch - we could have stopped
them every few yards.

The Kray Gang was at it's peak at this time. Enormous investigations were being made of the various murders. I was told that Police believed they carried out far more then could be traced back to them - but, that's just gossip. Jock had shown me the bullet holes - still ringed with Police
chalk circles, in an old wall where Jack 'the hat' McVity had been killed quite recently. There was
also a search for one of their hitmen who had gone missing. Rumour had it that he was dropped into bridge foundations on the M1 .

A Pub in Mile End Road - The Blind Beggar' - used to have a framed bullet found behind panelling.
This is where they claimed he had been shot. The owner's claimed the Police missed-it.
Who knows ?

Next Chapter I join my 'Relief' ( the name for the patrol unit - at that time there were three
giving 24 hour coverage) at HB and go on Patrol on my own.