LIFE ON THE HOME FRONT.

So,what was the terrible surprise my Grandmother made for me ? A small uniform of an aircraftsman in the RAF. It had a tunic, trousers and the sidecap - and the trousers were held up with tape in a bow at the front. More of that later. All small
boys in Britain were put into these type of uniform - it showed our support for the troops. Why the RAF - they were the ones fighting on a daily basis to defend Britain and were the heroes of the hour.

This is what you musn't overlook - whilst it was the 'phony' war in Europe, England was being bombed on a daily basis.
These were daylight raids and this was the Battle of Britain. Basically, they were aiming for the docks and industrial areas and we were not too badly affected - although many houses were hit when they missed - or, just dropped their bombs without caring. We were always kept close to home - and of course, at this time I was not at school.

There were virtually no cars on the roads - mainly military vehicles. My Father had obtained a bicycle and it had a child's seat on the back - I remember sitting behind when he took me for a haircut. Aircraft overhead were common and I often
saw aerial dog-fights - we would all cheer for ours and I remember seeing one shot-down - to a small boy that was a dose of reality.

Britain was just so short of everything - every park had it's railings cut down to be melted. Didn't matter - no-one went out at night. I remember my Mother's Grandmother being ill and we had to catch a bus. Total darkness - torches had to have a cover with the tiniest of slits - buses had a tiny light inside and the headlamps also, had tiny slits. We made it, but
my Mother stayed the night, I was too frightened to go back in the dark. I was only about 3 1/2. I was not to see street lamps or, cars with headlights until after VDAY in 1945.

Aluminium was the sought after metal - we needed it for aircraft. People would come to the door asking for old saucepans -
in the end my Mother had to say no, and hung onto what we had.

Because we lived just outside of Central London no-one - as far as I remember - had air raid shelters. We had practise of going into the cupboard under the stairs - which the ARP Wardens said was safest (Air Raid Precautions). Apart from these incidents, life went on as normal for a small child. This was to shortly change.

One point I would like to make - Britain had double summertime during the War - this meant that the clocks were put back 2 hours to take advantage of daylight. That meant it was light at 4 a.m. and in summer dark at 8p.m. However, in Winter
it meant we were in total darkness by 2-3p.m. in the afternoon.

Normal regulations were suspended to allow the keeping of poultry - also, people were encouraged to support the War Effort and grow their own vegetables. We had a small flock of about 8 or 9 Ducks - about a dozen hens , which of course only lay in the Summer. Forget eggs at other times - we are all spoilt today with battery chickens. A chicken was a luxury food that was not rationed and my parents had to learn how to kill and prepare one. How many people could do that today ? We would have one on very special occasions. We also kept rabbits. This was a problem - I grew too fond of them and played-up when one was to be killed. I was allowed to keep one white one - and he actually won a small cup - which I still have over 70 years later !

To preserve eggs over the winter my Father had buckets filled with Isinglass in the spare bedroom. They didn't taste like eggs we know, but that was how they were preserved. I have no idea what Isinglass was. He also obtained an incubator
and at the right time would put eggs in to hatch and we raised them in the garden.

With the two gardens opened-up - the fence was taken down between them - we had potatoes and all of the green and root vegs. I have read articles in later years that say this was the most nutritious food the British had eaten and we were stronger and fitter for the limited diet. You rarely saw obese people - not like today will all the fatty foods.

We certainly needed to supplement our food rations. I think at this time an adult - on his ration book , got about three rashers of bacon a week. Butter was about 2 0zs. (64 gms.) eggs - 1 or 2 a week, Meat about 4 ozs a week (125gms.).
Of course ration books were saved and therefore for meat , we could have a whole 3/4 of a lb between three people (375gms). My Grandmother was a great cook and remembered the meals from the 1st WW - when food had also been short. Eggs changed when America entered the War and started sending powdered eggs - we also got Spam - and I still like it.

One of the most strange memories for me is that I remember a grocer's shop before supermarkets and processed food.
Tins were on shelves at the back - a front food counter held the perishables - and biscuits were weighed from the tins they came-in. Oh, Yes ! You also queued for everything - meat, veggies, groceries, sweets. There was always a line outside - even early in the morning. And, when word went round that something that had been out of stock was back -
then see the women move. When I was in a push chair I could go as well, but after that it was too long for me to stand.

THE WAR CHANGES FOR CIVILIANS

The Battle of Britain - despite horrendous for our young pilots, was won by the RAF - coming to a head when we shot down over 200 German planes in one day. Numbers are contested by both sides - but, it was something around that figure. The German Airforce could not sustain losses of that size and they changed tactics.

Flying at night was difficult in those days - pilots were never sure exactly where they were - hence the importance of no lights showing. From our point of view it also made it very difficult for our planes to locate the enemy. London was ringed with heavy ack-ack guns - 3,7" and also lighter 40mm Bofors guns for lower flying aircraft - strangely, 14 years later in Australia I was to be an instructor in Sydney on these light anti -aircraft guns. Giant searchlights were also installed to
support the ack-ack and when a beam caught a bomber all of the other lights closed-in as well. Then the guns opened-up. It was strange to see this small plane in the middle of the guns and puffs of smoke going off all around.

From Sept.7th. 1940 to 10th May 1941 - 76 consecutive nights - London was bombed by consecutive waves of German bombers. The damage was unbelievable - the casualties horrific. There was no quarter given to Civilians and it was this time that Children were permanently evacuated throughout Britian - some never to return home until after 1945. We left to an Uncle in Watford for a few weeks, but both my Mother and I had a 'meeting' and decided we would go home.

This was the period of the famous London Blitz. Many people left for outer areas at night - but we stayed put. Because - like many others , we had not installed a shelter, we were very vulnerable. The Germans were trying to hit the Pool of London - West India Docks - Deptford - Greenwich and Gravesend. However, in the dark they were very inaccurate and the houses and towns around were very badly hit. Several houses around us were hit and destroyed and many fell on a golf course which was at the end of our road.

I clearly remember my Father carrying me out of the shelter one night - that is when we had one - and the whole skyline from left to right was a a red colour. This was the famous night when London was nearly destroyed - when St. Paul's Cathedral stood alone in the flames - the night that is usually credited with British people saying - Enough - we will not be destroyed ! This was in December of 1940 - I was 4 years old - and I will never forget.

Next thrilling instalment on Wednesday - is there any one out there ?

ST. PAUL'S AT IT'S GREATEST HOUR 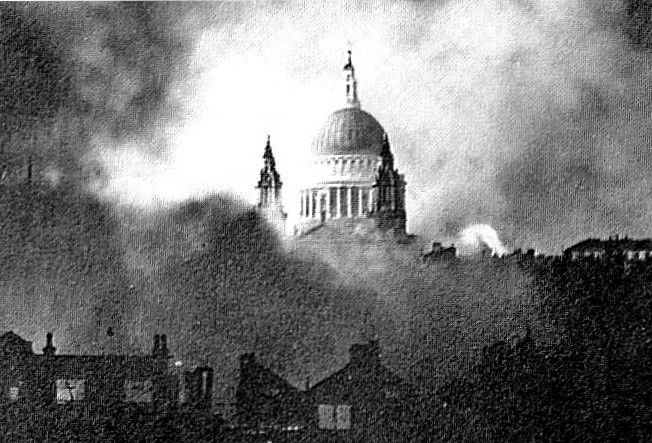