Hello and welcome to my blog which may start out insulting some and to that I will apologize in advance as insult is not my intention; a serendipitous plus perhaps...

Four years ago (2014) the Chairman suggested that starting with August and continuing to Nov. 11, 2018 might be an excellent time to run articles and content dealing with the First World War. From what I can see there has been little effort in that area, though I will admit to two factors.  First that I was away for some time fighting an ongoing medical “condition” that has, happily for me, gone into remission. Secondly, my main interest rests with the Victorian Period and just prior, that is to say from George III to the end of the Boer War in 1902. So my WWI material, other than medals, is limited.  I offer this glimpse into “The Life of Brian”, the non-movie version, to suggest that perhaps there was a lot more WWI content during the past four years than I was aware.  If you could have written more but just didn’t and cannot offer an acceptable excuse, such as I have, to cover your laziness, then think again.  If I can dig up an alibi then so can you, you’re just not trying hard enough.

Seriously, as that last statement was purely in jest, I have an artefact in my collection that I have been waiting patiently for the past four year to post.  If I may digress for a moment I need to explain something else, an admission, to some small degree, of my compulsive obsessions, and that is the criteria I like to apply to as many collectables as possible.  I like to collect firearms that have a manufactured date that commemorates an historical even.  As an example of my criteria, I have a British percussion pistol dated 1842. During the retreat from Kabul in 1842 there occurred the Battle of Gandamak in which most of the British defenders of the position were killed.  There is a famous painting showing an officer with the same pattern pistol. While the pistol in my collection was never used at that battle, or not likely any battle for that matter, it still has a date that commemorates the events as well as being an example of the type of pistol used during that time.

The specimen I have so long wanted to post is a Short Magazine Lee Enfield (SMLE) Mk.III* date marked 1918.  The specimen certainly has the “look” of war-time use and the date made me decide to make the purchase, nearly ten years ago.  I could have purchased a better condition SMLE, that is certain, but I purchased this rifle for the significant date of 1918.  Since the purchase, and just prior to 2014, I read an article that stated that many of the rifles that were in the trenches at the moment of the Armistice on Nov. 11, 1918 were marked with the letter V by the soldiers who were present.  I recalled what appeared to be an “odd” damaged area on the stock of my SMLE example and when I looked at it again, this time more closely, there was the letter V clearly carved into the stock.  It looks to have been done a long time ago, though one can never prove it and the whole story of the carved V nothing more than urban legend, still there it is on my example.

Provenance is a strange beast.  Many offer word of mouth provenance and expect that to stand, others doubt even the most detailed documentation.  The “experts” are only giving what should be an educated opinion and even if they document their opinion it boils down to just that, an opinion. I have no provenance to say that the V is original to the trenches on Nov. 11, 1918.  I will say that there was no “story” to this rifle offered by the seller, like me I do not think he had even heard of the story.  Bottom line is that I never, and I repeat, never pay a dime more for a “story” and of course neither should you.

So where does this leave us?  On November 11, 2018 I will pick up this rifle and think of that soldier who may very well have held this firearm in his hands, in the trenches, at the very moment the Great War ended.  Is “it”, did “he”?  No one can tell for a certainty but what I can tell you, for me, is that it brings to life the struggle, suffering, terror and loss of comrades that lesser men such as this humble scribe cannot even begin to fully appreciate.  What was going through the mind of our hero as he sat in his trench, still half doubting that the war was finally over, with this rifle across his knees as he carved the V into the stock? That degree of relief and the pent up emotions must have been truly over-whelming.

Let us all lift glasses to those who served, those who fell and those who still serve and give a moment’s reverent thought to them all. 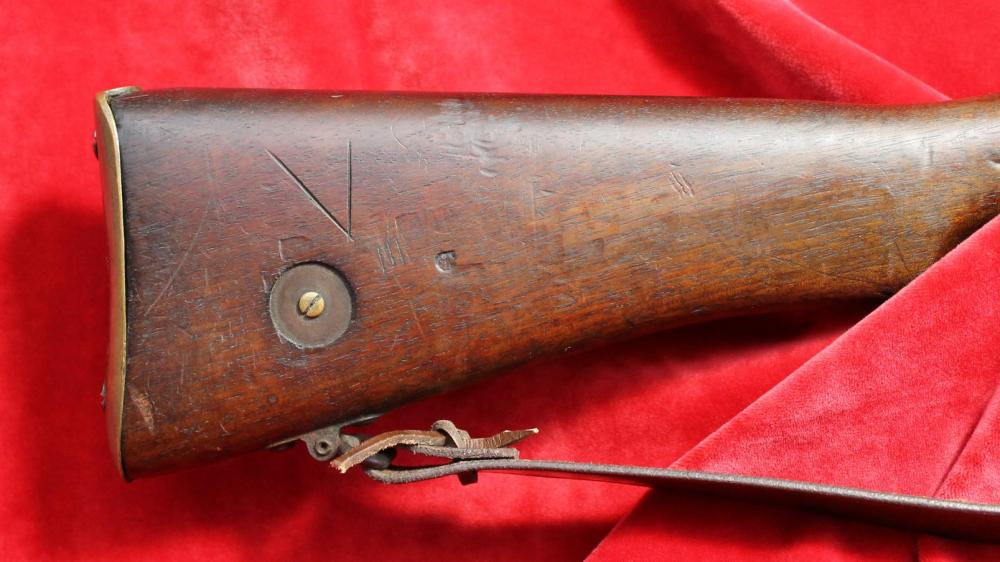