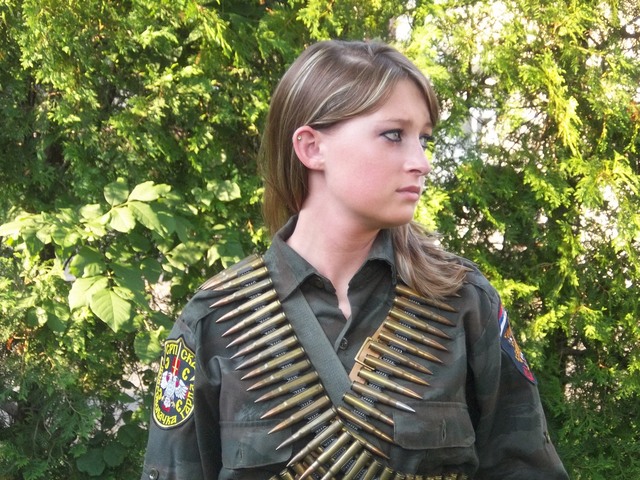 "Arkan's Tigers" (Serbian Volunteer Guard) photo. This living history / reenactment photo portrays a female combat member of the infamous paramilitary unit "Arkan's Tigers" (there were three female members of the Serbian Volunteer Guard from 1991-1995, that saw combat operations with the unit in Croatia and Bosnia). There are only a few known photos of these women in action with the Tigers, all of which are very rare and nearly impossible to find. Many women worked in staff, communications, and operations positions in rear headquarters areas for Zeljko "Arkan" Raznatovic, but history only records three that fought in combat. As with all of the combat uniforms of Arkan's Tigers, the style and appearance changed from their inception on October 11th, 1990, until their disbandment in April of 1996. This photo attempts to portray "Ljiljana", a soldier in the SDG, participating in combat operations in Bosnia, wearing one of the early versions of the female uniform (1991-1993).

The Serbian Volunteer Guard first wore blue MILICIJA ("Militia/Police") uniforms in the early days of the war, followed shortly thereafter by various green uniforms, Serbian "tiger stripe" camouflage uniforms, M89 camouflage sets, and then M93 camouflage. They also wore all black uniforms, and eventually NATO-style woodland camouflage. All of the uniforms (except the Milicija ones) had the SDG embroidered patch on the upper right sleeve, and the "tiger's head" (TIGROVI) patch on the upper left sleeve. Sometimes, however, they are seen wearing these patches on the opposite sides than normal. The female combat members originally wore the uniform jackets with black heavyweight cotton skirts, black stockings, and black leather "riding-style" boots. Eventually the rigors of combat necessitated a switch to the more commonly seen camouflage pants, sometime around late 1993. Green, black, and then eventually red berets were worn, with either the Krajina TO rectangular Serbian flag badge, the Serbian and Krajina Police flag on a gold ornamental base, a metal "Tigers" badge, or a small embroidered SDG badge. Serbian M89/M93 camouflage caps were also worn, as were black wool hats, face masks, and bandannas on occasion. JNA breast badges indicated rank; Zeljko "Arkan" Raznatovic, who wore no rank insignia, promoted his troops to officer rank and at least three to general officers - although only the SDG recognized the ranks.