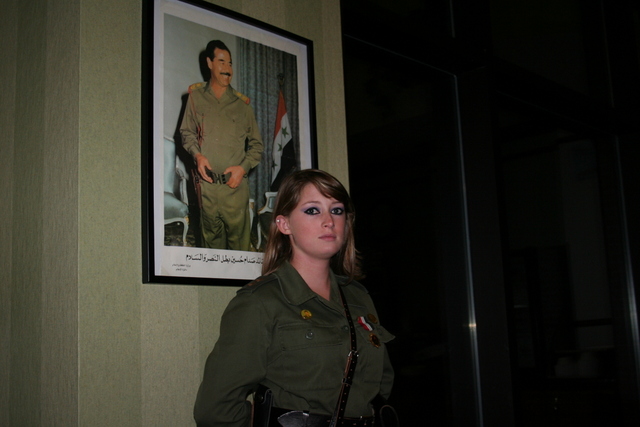 FEMALE COMMUNICATIONS OFFICER IN SADDAM'S ARMY: Historical reenactment / living history photo. This unique photo portrays a female member of the Regular Iraqi Army, circa 1991. From 1980 to 1991, female volunteers were an important part of the Iraqi military under the presidency of Saddam Hussein. Women served in the Ba'ath Militia ("Popular Army") and the Regular Iraqi Army in staff service, communications, medical, and security roles. This reenactment shows Mulazim awwal (1st Lieutenant) Amina Hariri in Baghdad, in July of 1991. She is dressed in one version of the female two-pocket jackets, and is wearing her golden Ba'ath Party Badge, her General Federation of Iraqi Women pin (showing President Saddam), and her recently awarded Um al-Ma'arik medal for her participation in military operations in occupied Kuwait from 1990-1991.

Photo Information for Female officer in the Iraqi Regular Army, 1991