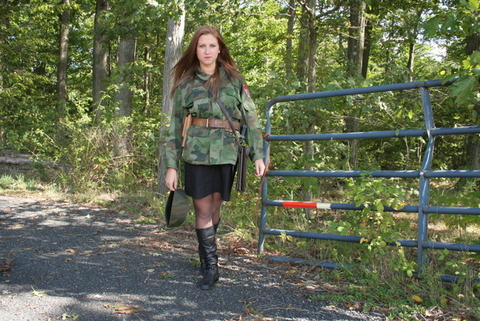 BOSNIAN-SERB ARMY / ARMY OF THE SERB REPUBLIC ("Vojska Republike Srpske") photo. This living history / reenactment photo portrays a female combat member of an infantry unit of the VRS (Bosnian-Serb Army). Many women worked in staff, communications, and operations positions in rear headquarters areas for the military forces of the Republika Srpska, but there were large numbers that served in front line brigades, as well as attached paramilitary units and militias. As with all of the female combat uniforms of the Bosnian-Serb Army, the style and appearance changed from their inception on August 12th, 1992, until the end of the war in 1995. This specific photo attempts to portray a female soldier participating in combat operations in Bosnia, wearing one of the early versions of the female uniform (circa 1993).