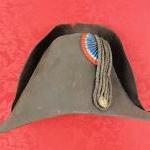 By TS Allen,
April 15, 2017 in Preservation & Restoration of Military Artifacts