We must have moved to Blackheath towards the end of 1942 - a big thing to happen to a small boy. I had left all of my old friends behind and would be years before I saw some of them again. I think, initially, I was sent to a local prep school which was a short distance away in another part of the Heath. The English school system is quite different to most others.
You start off at kindergarden - progress to your prep school and then enter your main school. There are no junior and senior schools as in the US - although, many major schools have a separate section for younger boys.

I don't remember how long I attended the Prep. - probably not long as I have no clear memories. The War put a different complexion on nearly all activities and the school you went to had no bearing on your parents' wishes - you went to the one closest to where you lived. This turned out to be St. Joseph's - a Catholic school run by the De La Salle Brothers. They wore long black robes with a doubly white collar that hung over the front. Because Southern Ireland - or Eire , was neutral
during WW2, many of our teachers were Irish citizens - and young ! This was something I was not used to seeing - most of the people you saw working were middle aged or, retired. Our young men were all fighting for their Country.

I will talk on the school another time - I have both good and poor opinions of my time there. At this point in time I was learning new routines in a much bigger area then I was used to moving around-in.

What a wonderful place to live-in - although I am sure it is much changed now. I said previously Mordern Road was all large houses in their own grounds - at the end of the road was - or, had been - one of the architectural gems of London
- The Paragon . Completed in 1806 it was where Royalty and the aristocracy from all over Europe lived. Alas, by the time we moved it had been bombed heavily and was rubble.

This applied to at least 2 - and probably 3, of the houses in our road. It was why my Father was able to buy so reasonably. I have always been an easy person to get on with - I make friends easily and work to maintain the friendships - I still regularly see - or, have contact with friends I have known for over 60 years. The most surprising was about 5 years ago when a boy at my school I had known when I was 8 found my website and tracked me down. Rather sadly we had little to talk about - too long a gap. The reason I mention this is because I soon made friends with the local
children of my age - and , with the regulations - we were all , or would be, at the same school

I will show some pictures of the Paragon at the end of this post - they have restored it exactly as it used to look. The whole area had suffered - the original Manor House - whose land this had all been hundreds of years ago , had been destroyed with a direct hit. Everywhere you looked houses were damaged or gone.

Having bought this big old 29 room house, my Father had quick and serious decisions to make. With the number of homeless people the Councils would billet total strangers on you if you had spare rooms. We converted the top two flats into self contained flats and found two nice families who desperately needed a place of their own. The first floor were a couple with grownup children and I used to go and visit them. The elderley couple on the toip floor - the original children's floor - were retired senior civil servants from the old Indian administration. They would have been better staying in India and annoying the locals - they certainly annoyed my Father. Nothing was ever right , and if I had friends to play we had to make no noise. They never came to speak - but rather sent orders by notes - I suppose that was how they were used to living in India. No wonder we lost the Empire !

The Heath was magnificent - many square miles in size it was quite untouched in the central areas. Every year a circus
would set-up camp and had a big fair with-it. When we first went there I was too young to wander - but later, with my new friends we would explore all of the woods and pits.

Tucked away in a dip was the small village - and it was a village. There was one garage still running - a post office - the
Railway Station , opened in the early 1900's - one butcher - one greengrocer and, one grocer. There were a few other shops selling women's clothing, hairdressers and- very importantly, a toy shop. I have no idea what he actually used for stock - but, I do remember adding to my Dinky cars there.

When I described a grocer's shop in an earlier blog - I was actually thinking of the village one. The windows displayed no stock - and for the butcher - if my memory serves, there were plaster cast of bull's heads in the window. Very little meat was shown - they never had enough. Sausages, offal and birds could be sold without points - but there wasn't much of them. Thinking back it must have been dreadful for the butcher - everyone wanted to be his friend to try and get a little more Ours used to have a list of regular customers and allocated these extras in a fair way - I always remember one day when he said - your turn Mrs. Mitton to have a chicken. Everyone was so excited and were hugging and congratulating my Mother on her good fortune.

All little boys have to have a pet - we had brought our black and white cat Sooty with us - and following my Grandmother's orders he had his paws covered with scarce butter and was kept indoors for two days. This was to make him remember where he lived - I think witchcraft was still in existence - and as for wasting butter ! Anyway , he lived a happy life and was much loved. However, my Father decided I should have a dog - but , a small one as food was difficult and we didn't leave much. So, one day a small rough coated Cairn Terrier - called Tess (we weren't very original in those
days) appeared in my bedroom. Now, for those who don't know, a Cairn was bred to be carried in the saddle bags of the hunt master and was put in fox's lairs to drive them out - with the foxhounds outside - you will understand why a sensible fox stayed put and fought the cairn terrier. Ours was prone to false pregnancies and would prepare 'nests' for her non-existant pups. Unfortunately, this involved tearing strips off the wallpaper - which could not be replaced in the War. We had to keep her locked up wheh these phantoms happened.

I should have mentioned earler that when the house was converted we kept the basement and ground floor. Bedrooms and bathroom were downstairs and on the ground floor, the kitchen, enormous lounge dining room and study. There was also a large entry hall and all the glass was 1/4 inch thick plate glass. This will come-up again. My Grandmother had decided to stay in her house - probably safer, but it caused a lot of worry and trips when petrol was almost non-existant.
She was 69 at point in time.

Whilst all of these happenings were going on, I have overlooked to tell you that the Germans were still bombing us on a nearly daily basis - daytime and at night. We had a re-inforced small room in the basemment - and hoped for the best. 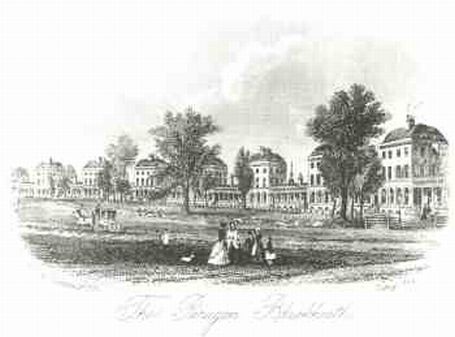 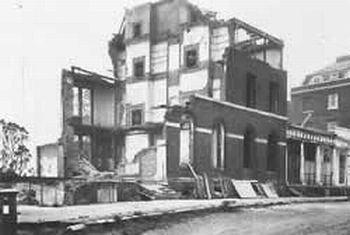 Some of the War Damage

The Paragon as it is today