It seems that I, like many of you, have been a collector for most of my life.  Starting as a child, to be clear, I “started” as an infant, and should have written that it seemed that I started “collecting” as a child.  Back on point; I was one of those odd little buggers who, for the most part, kept the original boxes that had contained my new toys.  Cap pistols were among my favourite toys and again that’s the same as most of us, at least most of us who were boys; though there is nothing wrong with girls having toy firearms.  Note the added political correctness after-thought.  It would be quite debatable to insist that I was a collector much before the age of sixteen, when I purposely ordered an Enfield WWII spike bayonet, the No. 4 Mk II* for a grand total of .99 cents, plus shipping form International Firearms in Montreal with the express intention of starting a collection.  Could that really be over half a century ago? Now there’s cause for reflection.

Anyone who has been with the GMIC for any number of years has read about the extent to which some (many?) collectors will go to secure that “once in a lifetime” piece.  I have lost track at how many times I have told my wife that a pending purchase was a “once in a lifetime” find.  I seem to have, she’s reflected on many occasions, more “lifetimes” than a cat.  Yes, she is most droll.

On March 26 there was a gun show at Orangeville Ontario, about 1½ hours drive from here, that my friends Brian, Mike and I were attending.  At the show a dealer, with whom I have had a long standing relationship, offered me a British Police painted truncheon from the rein of William IV (1830-37). I was short of funds and asked if he would hold it until I could find a cash machine, of which there was none at the show site, meaning I would have to go into the city to locate one or at least a bank branch with such a machine.  I am not a fan of the ATM as I can’t help feeling that it is somehow akin to gambling, one of these times the machine will win, I am sure.  The dealer insisted that I take the truncheon and pay him the next time we meet.  This is not the first time he has made that offer as it is not the first time I was short on funds with no ATM on site.  We have a long standing joke between us in that I will not take him up on that offer as one never knows if one will be run over by a bus, so-to-speak, before the debt can be paid.  This has become such a common joke between us that he ends emails to me with “Watch out for busses” in place of “Regards”.  This has, I am sure, puzzled other show attendees when he says that to me when we part company at the shows.  While at this same show I found a 1912 pattern British Officer’s Cavalry Officer’s sabre for sale at the table of another dealer.  I did not make the purchase as, you will recall, I was short of cash.  I told Brian and Mike about it and had to listen to Brian’s lecture on how I could have borrowed the cash from him for both items.  I do not like borrowing money from friends even less than using one of those infernal ATMs.  I had decided that if the sabre was available at the next gun show, this time in Jerseyville Ontario on April 9, which is about an hour’s drive from here, that I would negotiate a price for the sabre.  To be clear, the truncheon would not be available at the next show and I would have to wait to secure it until the next Orangeville show on May 7.

Time flies when you are having fun, they say; however when you are waiting for a treasure to be available for your collection, time takes the bus, a slow bus! Finally the show date arrived and we all set out much earlier than we would have normally to assure we were through the door in quick time and the sabre would be mine.

Horror, oh the humanity of it all, the dealer and my sabre had decided not to attend this show.  Had the Collecting Gods forsaken me?  Was this some sort of punishment for evil deeds long past and if so what deeds?  True there was that incident from when I was a kid involving a lit illegal Roman candle firework that fell over, a garden shed, an open door and a gas can.  In my defence and as I pointed out to my father there were no witness to the alleged explosion; none that were over the age of majority that was. So really it was simple hear say that I was anywhere near this unfortunate set of coincidences, and therefore inadmissible as evidence.  It surely couldn’t be that small bit of misadventure and besides I was the injured party in that I served a period of grounding for an offence that the prosecution (aka parents) failed to prove, due to lack of evidence, and then denied me an appeal process.  Regardless of the reasons I was now doomed to wait until the next Orangeville show of May 7; a total of a month and a half. The longest month and a half of all time which includes time waiting for the next season of Game of Thrones.

Alarm set for 04:30 in anticipation for Sunday morning and the Orangeville show, and then in the middle of the night I was hit by one of the worst cases of the flu I have ever experienced.  By morning I was in a terrible condition running a high fever, among other symptoms that were also “running”.  At 05:00 Brian and Mike arrived and I was not in any shape for the hour and a half drive to the show.  I arranged for Brian to pay the dealer who had the truncheon put away for me and bring it back and also to negotiate a price for the sword with the other dealer.  I knew the asking price, which at this point I was more than willing to pay and therefore knew how much cash to send and so like the Ringwraiths sent by the Dark Lord Sauron (Lord of the Rings) away Brian and Mike went on their quest.  This was actually a better idea than had I been able to attend the show as I am one of the poorest price negotiators you will ever meet and Brian one of the best.  If I were to negotiate the price I would probably end up paying more than the asking price and think I had made the deal of a lifetime.  You would really like playing poker with me as if I am excited about an item, as would have been the case here, you can read it all over my face.  It turns out that Brian indeed negotiated a better price for the sword and would have secured an even better settlement had another attendee at the show not said, part way through the negotiations, that if he (Brian) did not take the sword that this new “player” would.  That was actually very rude, not only because there was an active negotiation taking place but it is not polite conduct to interrupt any conversation between two people.  Not that I care about the price, as I have said I would have gladly paid the asking price, but there is an ethical and proper manner which society needs to maintain, otherwise we are no better than the beasts of the field.  I suppose this makes my earlier point regarding the extent to which collectors will go to assure the procurement of an item. The bottom line, and the only point, is that the sword was now mine, mine I tells you (insert maniacal laughter here).

I would estimate now that at or around (police speak) 11:00 hours I vaguely remember what sounded like Brian’s voice in the distance, through a fog of fever, talking to Linda in our kitchen.  The next time I was conscious was around 1700 hours (5:00 PM).  I shuffled out into the strong day light of the kitchen from my dark abyss of illness (me feeling quite sorry for myself) to see what Brian and Mike were able to secure for the collection.  It was then that I saw the treasures they had brought, the sabre and the truncheon still waiting on the kitchen table where they left them. I totally reject the story Linda likes to tell as to how, like Smeagol aka Gollum (Lord of the Ring reference again), I clutched these treasures mumbling references to myself in the plural and calling the truncheon and sabre “my precious”.  Further to this I did not, and I must emphasise, I did not, scurry back to bed with “our precious”, this is a conspiracy-style story that seems to have already made its way thought the whole family; one that will no doubt be repeated at every family gathering for years.  I have found that one never wants this family to “get one up on you”, not that I don’t deserve it, however, turn about is not, I repeat not, fair play when it happens to me.

While it may have seemed at the beginning of this blog I was going to criticise the extent that some collectors will go in order to secure yet another treasure; this is not the case.  Had Brian and Mike not been able to attend the show I would have grabbed several sick bags and drove the hour and a half each way even if it had risked my very life.  Considering that I have, in the past, driven two hours to a gun show in a blinding snow storm this would have been nothing that would have surprised my family.

Am I crazy, as one of my friends has suggested. No I’m not crazy, just one of those strange creatures...a collector. 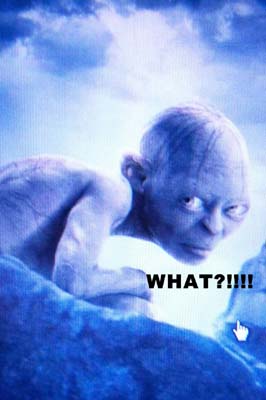