This is not the blog I had in mind for this month as may be evidenced by the lateness of its submission.  I usually have several ideas in the works with most needing more research and fact checking.  No doubt this surprised you since I almost never state references or even sources for my blog content.  My reasons are as uncomplicated as I like to think I am.  I do not aspire to be held up as an expert or even an authority on history or the collecting of historical artifacts.  I have never thought the amassing of large quantities of items qualifies me as anything much above an organized and selective hoarder.  There are, believe it or not, 212 drawers in the collection room which contains our medals collection and I assure you this doesn’t qualify me as an expert.  I use the term “our” when referring to the collection as my wife has added many specimens over the years, mostly from the Victorian era. Therefore, the collection is not “mine” alone and therefore the use of the term “our”.  Sorry to disappoint those of you who may be trying to psychoanalyse me; I have no other personalities, not that “they” have told me about, at least.  You’ll notice from the photo below that I am still working on the drawer labels. Oh, I see, Brian decided to ramble along for several paragraphs and attempt to pass it off as a legitimate blog. No, I tried that, in a manner of speaking, during my mid-term French examination in my first year of high school, I took all of the French phrases and words I could remember, arranged them into sentence-like strings and hopped for the best; it didn’t work.  On my final French examination, the questions of which were totally in French, I simply wrote, “I don’t read French, therefore I am unable to complete this exam.  Considering you, as the teacher, have never spoken a word of English during the year I must assume you will also be unable to read this note”, and signed the bottom.  I dropped French the next year, but picked up a working knowledge of Canadian French, the only true French a real Canadian should speak (check out any restaurant in Ottawa) during my years with a French Canadian construction crew.  I’ll bet Madame what’s her name would be surprised, perhaps a little shocked, at some of the language I learned on the job.  Viva Quebec!

Now back to the title of this blog.  It is a reference to the closing scene from Indiana Jones and the Raiders of the Lost Ark and the warehouse where the Ark was finally sent for storage.  Indiana Jones, (you remember), that’s the theme music that plays in your head as you enter a military collectables show; or does that just happen to me?  Anyway, as I was working on the blog for April’s edition I needed some reference material and a really nice picture I purchase about a year ago, but where was it.  I looked through every drawer and cabinet here in the office (aka the “Home Office”) with no luck.  Where did I put the darn thing?  I know it is not in the collection room as I don’t store such items there, only a few reference books and they are all in order and accounted for.

It has been said that everyone has three lives; one that the public sees, one that the family sees and a third one, possibly the real you, that only you see.  I too have a dark side, a horrible little secret that I am about to share for the first time.  Not even in my past did I reveal this to the “shrink” during my evaluation; whom I might add found me quite normal, in fact he wrote in his evaluation that I am A.B.Normal, so there.  We have two large storage areas in our basement where, years ago, I started to store those items that I had no real place to keep them, papers, research material, pictures books and some collectables.  In the beginning I would mark “Bankers boxes” with “Brian’s Stuff” and store them away.  After a time I would mark subsequent boxes as “Brian”, then simply “B” and more recently I left the new boxes without markings as I am the only one to use these areas.  With doors closed it was a case of mind over matter, that is to say, I didn’t mind and it really didn’t matter.  So the image I have so carefully crafted as an organized and regimented person has been a sham all along.

So far I have been unable to find that picture I was looking for though I have just begun looking through the items in storage.  So far, along with several photos of military themes I have found a Special Constabulary medal in the original addressed box and a WWI named trio, but no picture.  Be assured the if I happen to run onto the Holy Grail or the lost Ark of the Covenant I will be sure to let you know. 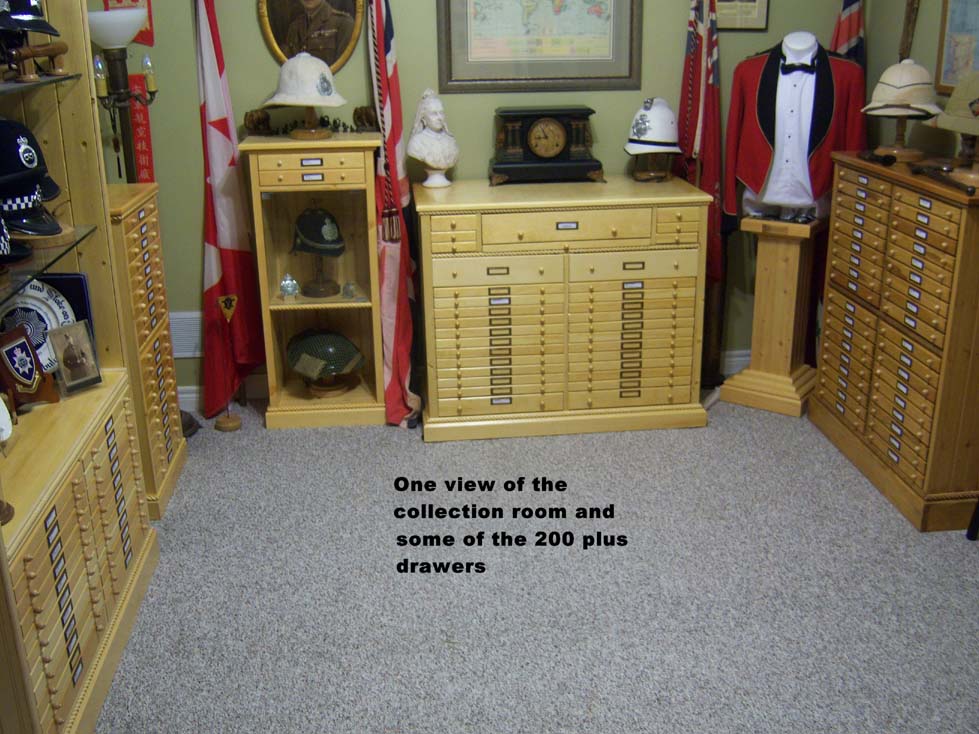