The British and Their Tea.

History is not just about the dates of battles, there is the consideration of planning, tactics, and supply, as well as establishing objectives and the logistics in general to be considered. All of these factors and more could never take place or even be considered by the British Military of the Victorian era without the key ingredient; tea.

Before we get out the Brown Betty let’s consider tea and the way different counties enjoy this beverage. I understand the British like their tea with milk and in some areas of the UK with the addition of sugar; this, along with the offer of “I’ll be mother”, a non-gender specific nor indicative of any genetic kinship, offer to pour the brew when ready. Those in Canada who, like me, hail from the far Northern regions of Ontario take our tea black. This is often made in an old tin pail over the noon-day camp fire (during hunting season), using water from a beaver pond, hello Guardia, (also known as Beaver Fever, which sounds like an emotional obsession of a teenage boy; only it’s much worse)  after skimming the green pond plants from the surface of the boiling water. No wonder you can’t poison a Canadian from the North. From what I have read the Americans like to bulk soak their tea in questionable harbour waters before the drink is prepared. The only reference to this comes from the Boston area so they may no longer practise this strange behaviour. Exactly how the Australians take their tea remains a mystery though I suspect water from a Billabong may be involved. If this is so then they too might be like Canadians and difficult or even impossible to poison. I asked a friend from Australia this question and was bluntly told to f**k off. I may have touched on a violation of the State Secrets Act.

The question in the minds of many readers, unless I have already “lost” you, is when did the British stop transporting loose leaf tea on campaign? If you never thought about it, then you might just be doing so now. It’s OK, you can admit it, we’re all gentlemen here; it’s in the Club’s title.

While reading the book “In Abor Jungles” by Angus Hamilton, chronicling the Abor Expedition into North Eastern India, 1911 to 1912 (see page 180), I came upon this interesting fact.  A warning about the book in general: if you are not into in-depth studies of relatively obscure military actions then this book may not be for you. Mr. Hamilton covers the traits of the different tribes in infinite detail and these sections are about as exciting as the list of “Begets” found in the Book of Geneses. Just to be fair that section of the Bible is actually quite important as it sets out the lineage of a certain family. Just so I don’t spoil the ending I suggest you read the Book.

The Quote from “In Abor Jungles”:

“The tea was Liptons of very good quality and the subject of a somewhat daring experiment, as the well-known firm had been permitted by the Government of India to provide supplies of compressed tea for the use of the expedition instead of loose leaf that hitherto had been favoured. A special machine was sent to India for the purpose of compressing the tea; and, as it was the first time that troops on service in India had been given compressed tea, the military authorities were taking a keen interest in the experiment. Happily the departure from the customary methods of carrying tea was a great success and it was pretty well certain that compressed tea will be employed in future wars. The advantage in transport was very obvious, a chest of forty-five pounds only measured 20 inches by 15 inches by 8½ inches”.

I say old boy, never thought your life would be enriched by an article regarding tea here on the GMIC, did you?

Photo below is from the book, “Military Ink: A pen at war”, 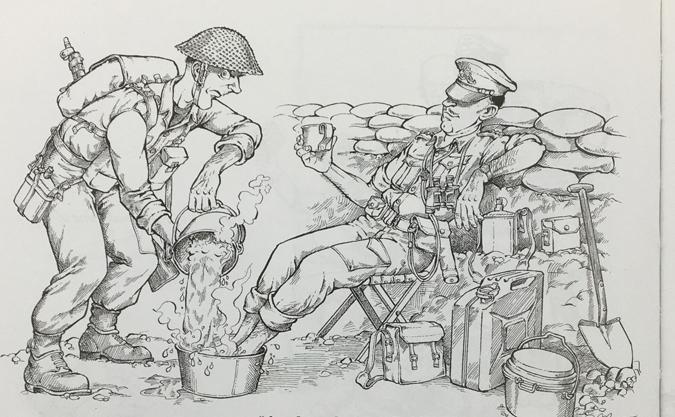